First weekend of May- Wood chips and fencing

This weekend, I didn't plan to do much with the garden, but we ended up doing more than I thought we would, so I'm pretty happy about what we accomplished.  It's still too early to plant, but we have a woodchuck or two or three in our yard, and last year he got into my garden despite our best efforts to block and trap it.  (We kept catching these two baby raccoons.)

Getting the fence up was a priority for me, especially because we went and got a load of wood chips on Saturday, and I needed the fence to be up before I could get all the wood chips situated the way I want.

The LaGrange township has a composting site, and while I had never seen it, I read an article where some high school kids did some volunteer work on trails nearby a few years ago using wood chips donated from the LaGrange composting site.  So I was really hoping I'd find wood chips there because then I wouldn't have to buy them.  They are only open on Saturdays from 10-3, so we went, me thinking we were just going to see if they had them, but Mike with the idea that we were going to bring a load home (which I didn't realize until we got there).  They had a huge hill of wood chips, so I was really excited and we brought a truck bed load home, me thinking we'd need to make several trips and would probably not finish it this weekend due to the need to finish other errands and of course, we had put the fence up first. 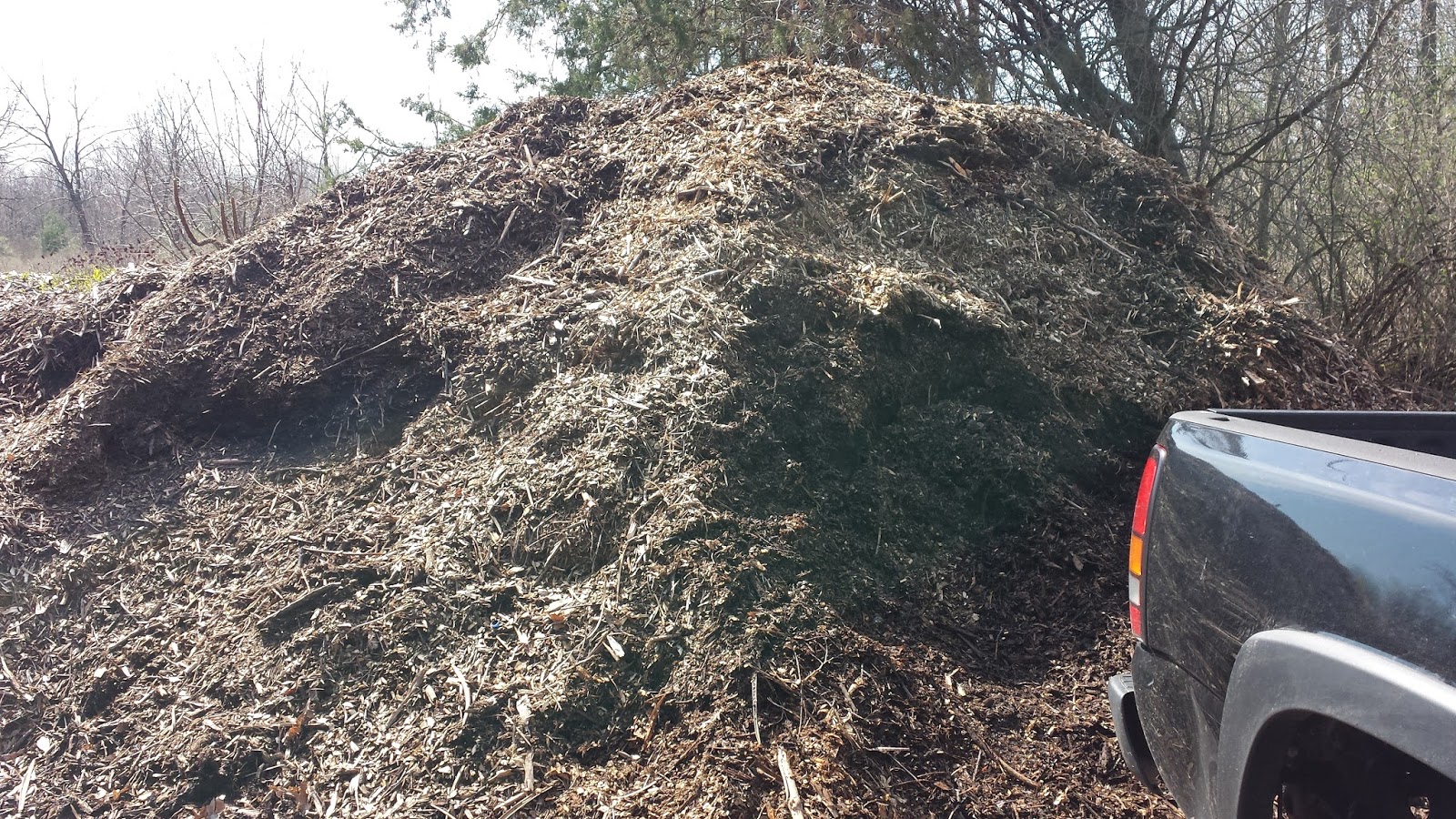 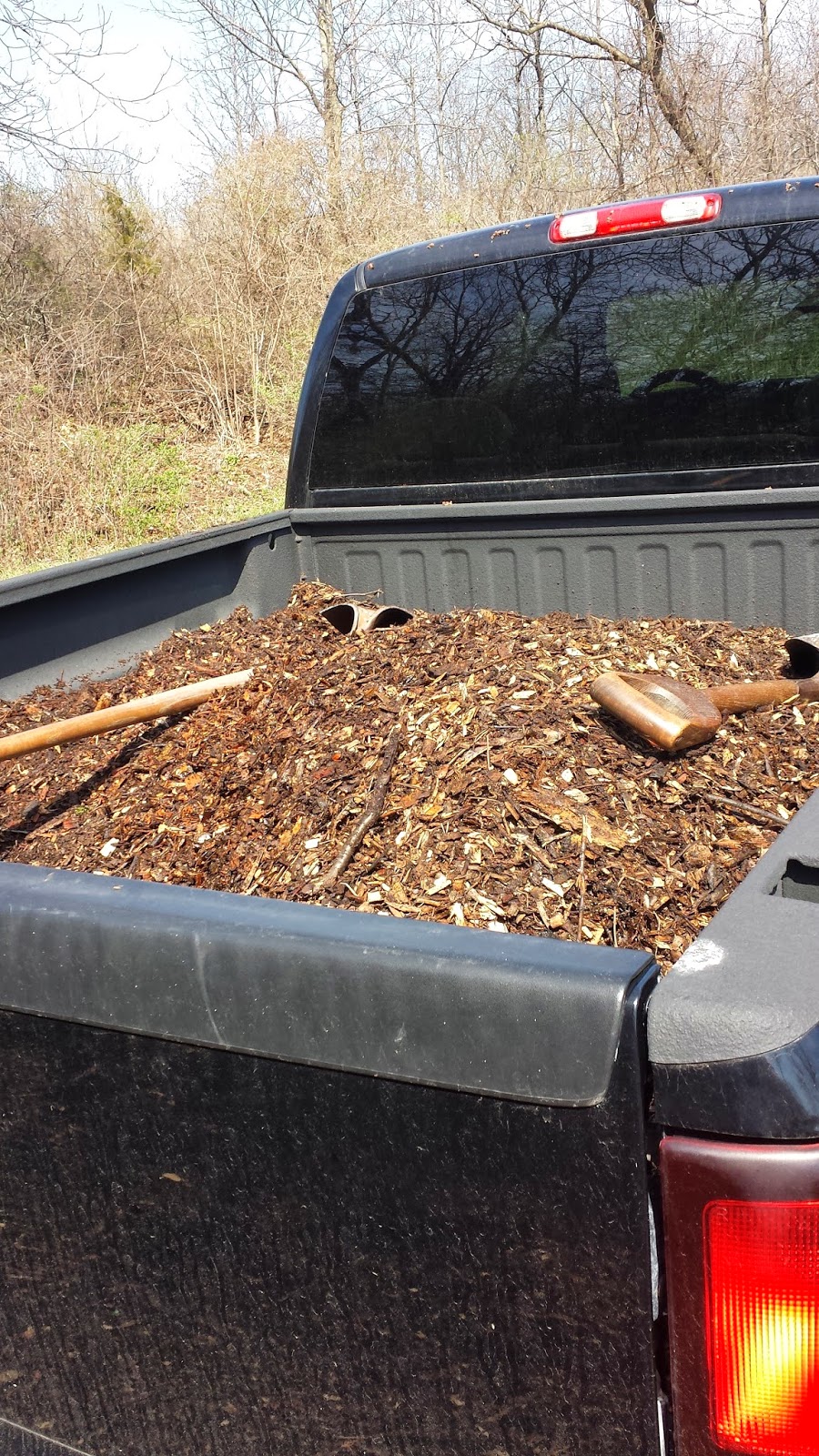 So we came home and unloaded the wood chips, and we had more than I thought we did.  I won't need another full load to finish up around the beds. 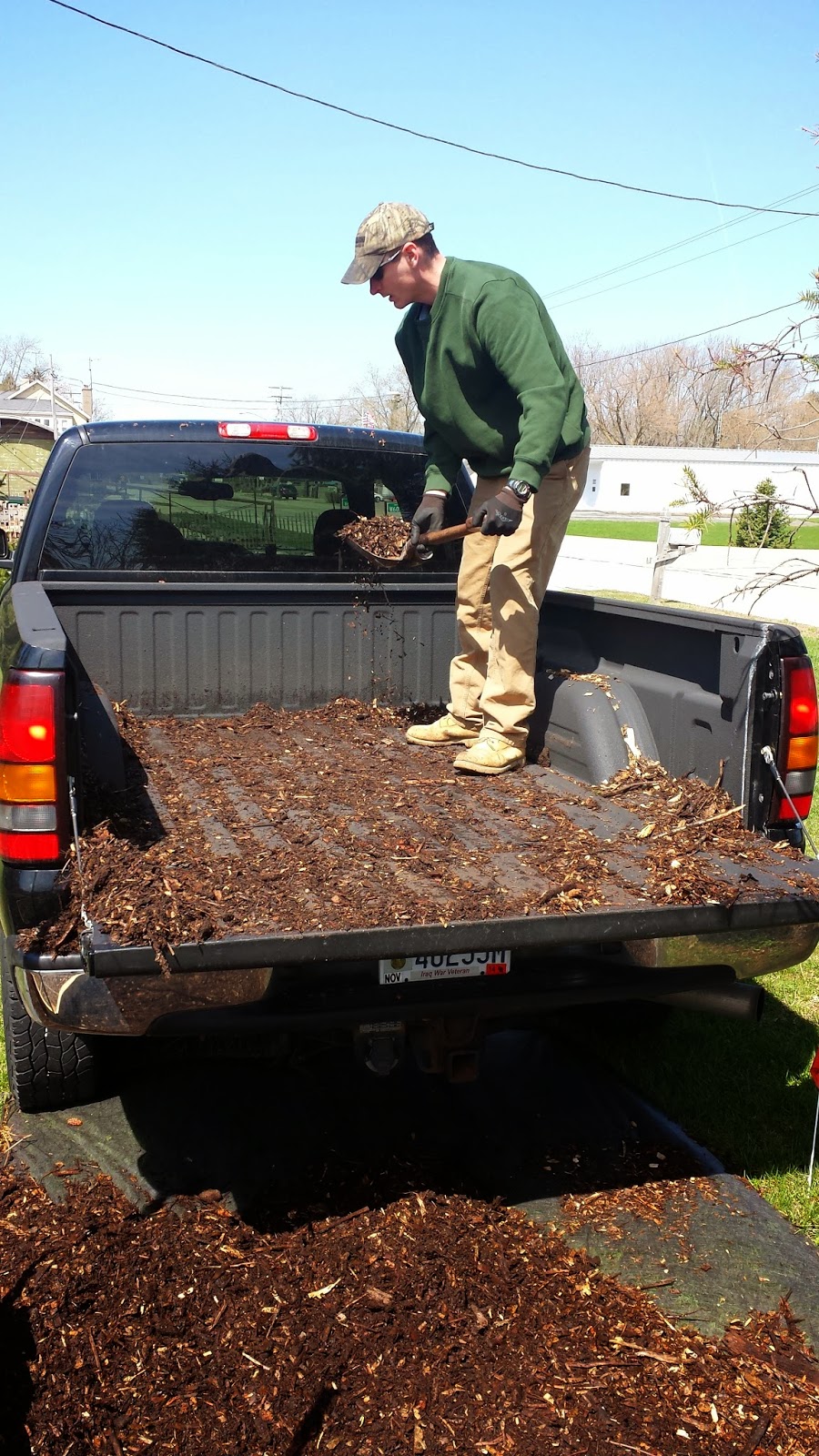 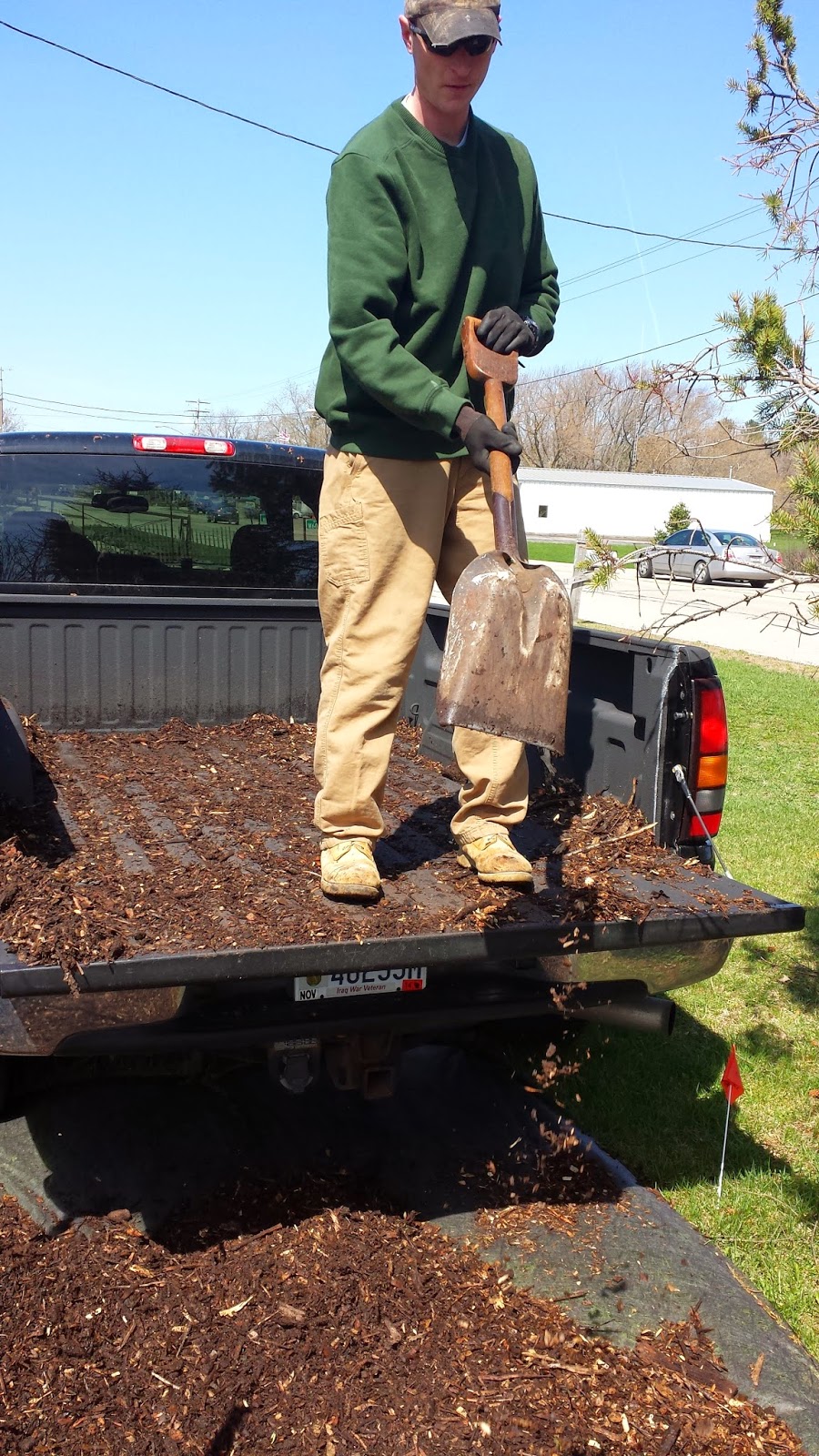 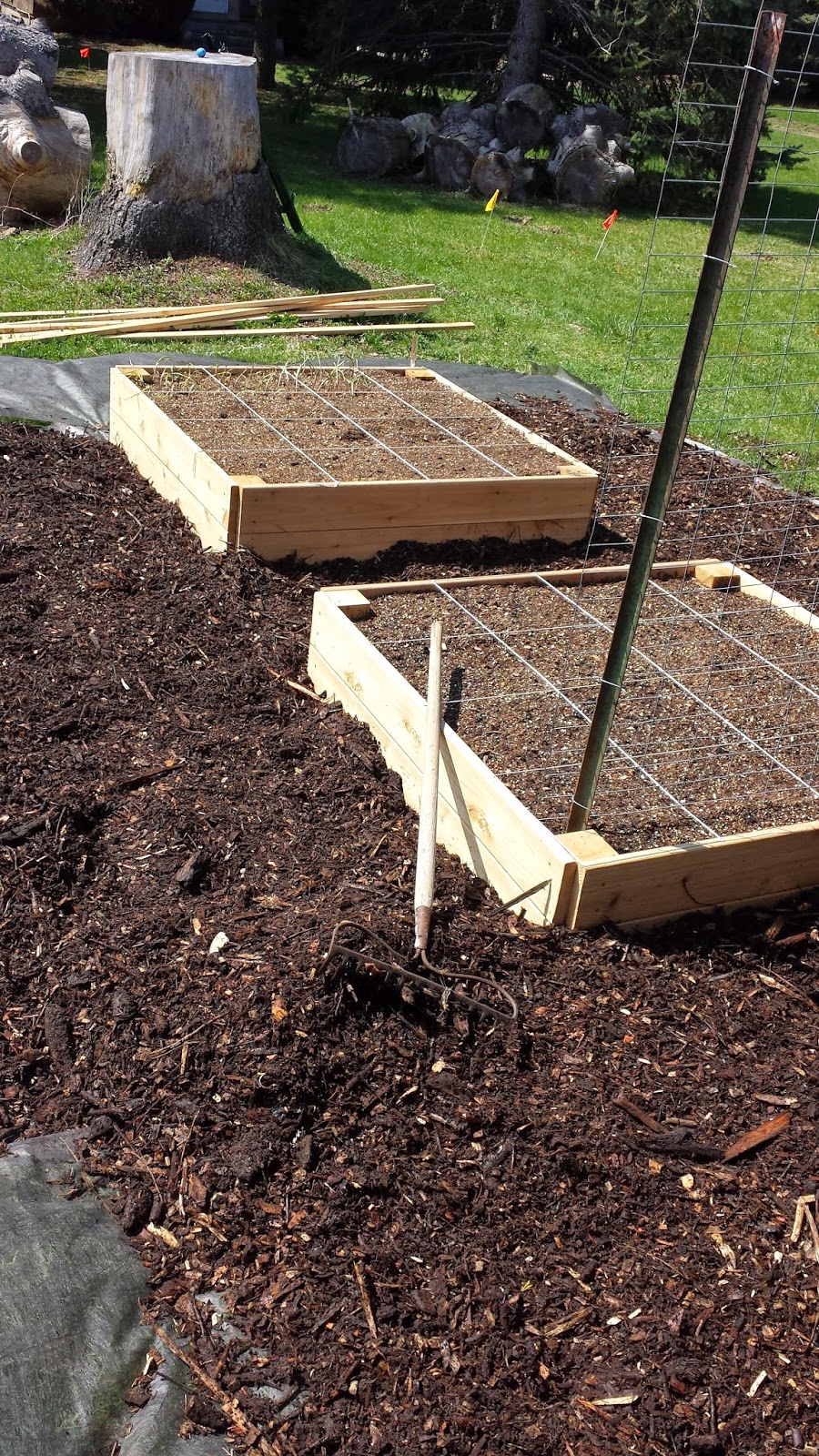 We didn't accomplish anything more on Saturday because of all the rest of the errands we had to run, but on Sunday, we decided to put the fence posts up.  Our friend Chris was coming over to help put up some dry wall, and while we waiting, I thought maybe we could get the fence posts up.  That wouldn't take long.  We were just finishing up when Chris arrived, so we decided that while we were out there, we'd take advantage of Chris' help and get the fence put up.  It didn't take too long.  It's not as pretty as I'm going to want it long term, but it will get the job done this season.  Maybe if I expand in the next year or two to three or even four beds, then I can put up a more permanent fence with wood posts and a gate.  We are going to put a gate in this year, but we haven't quite figured out how to make it yet and attach it to the fence posts.  Currently the fence is just hooked to itself. 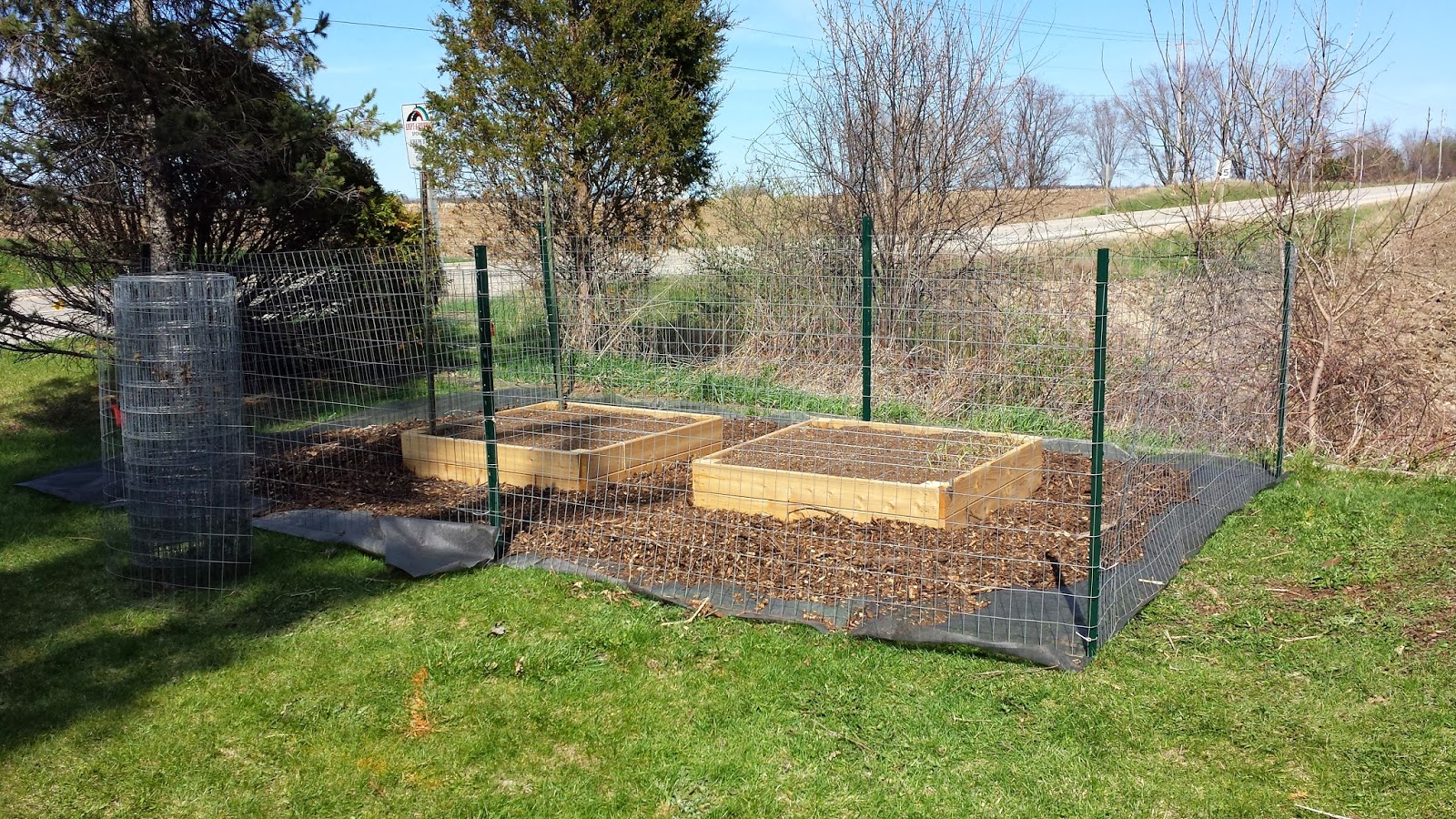 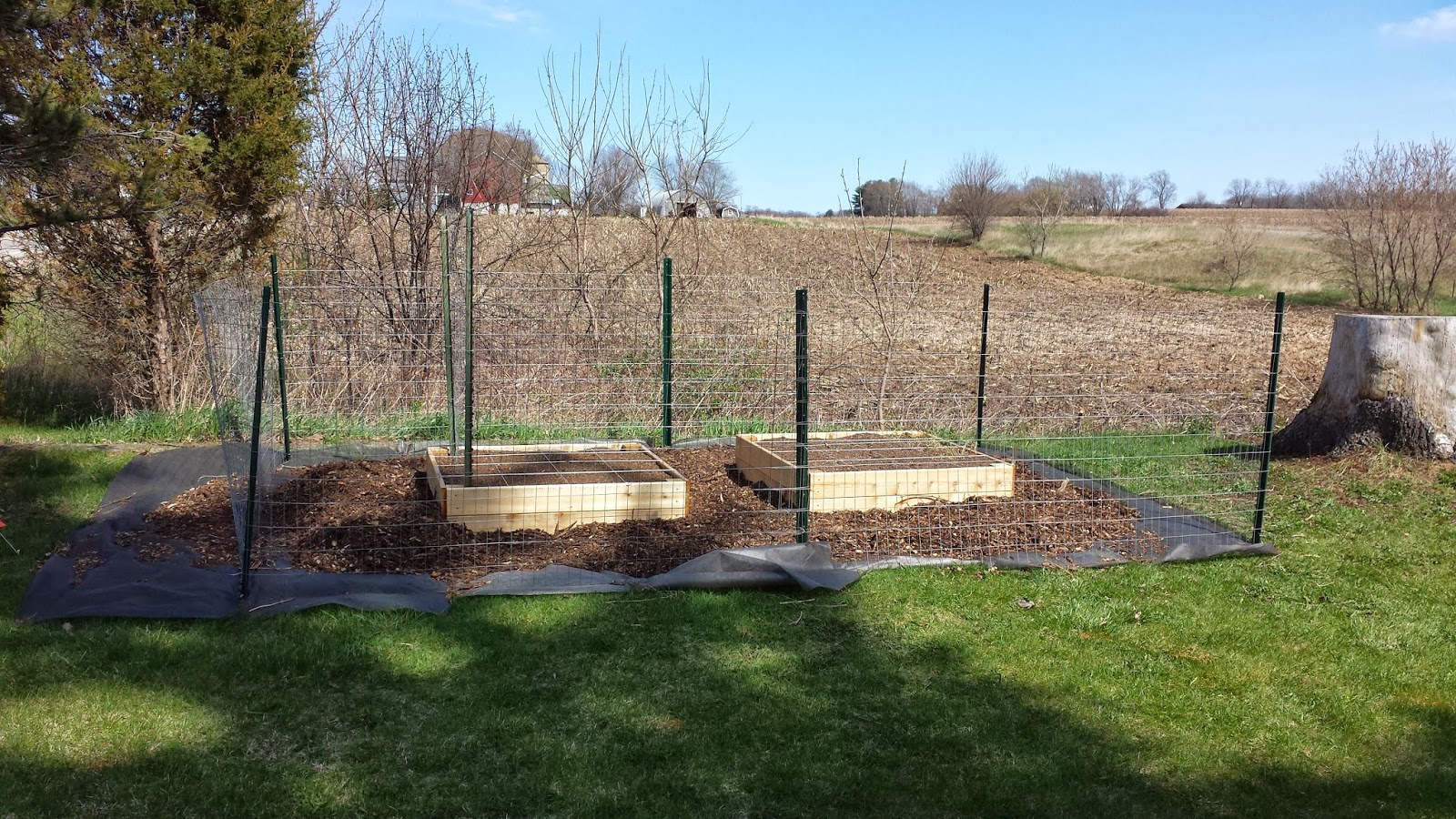 You can see we didn't get one of those posts straight.  But that will be remedied when we put up the permanent fence.  It's okay for now.  The wood chips will extend a foot past the fence, so I won't have any grass growing up along the fence that I have to trim.  I'm going to put mulch (or maybe use wood chips, they are free after all) around the big tree stump to the right of the garden and create a little flower bed or something there.  I'm going to cut out a bowl in the top of the stump and put some potting soil in there to make a planter.  Maybe put some geraniums and ivy in it.  It'll be pretty.  I'm also going to put mulch or wood chips under the bushes to the left of the garden so that I can avoid mowing at all in that corner.  But that's another task for another day.


Oh, and my peas finally sprouted yesterday.  It took two weeks, and we've been checking every day, but yesterday we had two up.  My radishes, which were only supposed to take 4-6 days to germinate are not up yet and it's been 8 days.  I think last week's cool, rainy, overcast weather slowed things down.  We hadn't seen the sun for almost a week!  This weekend we had two sunny days, not really all that warm, but at least the sun was out.  Hopefully we'll see more seeds germinate this week. 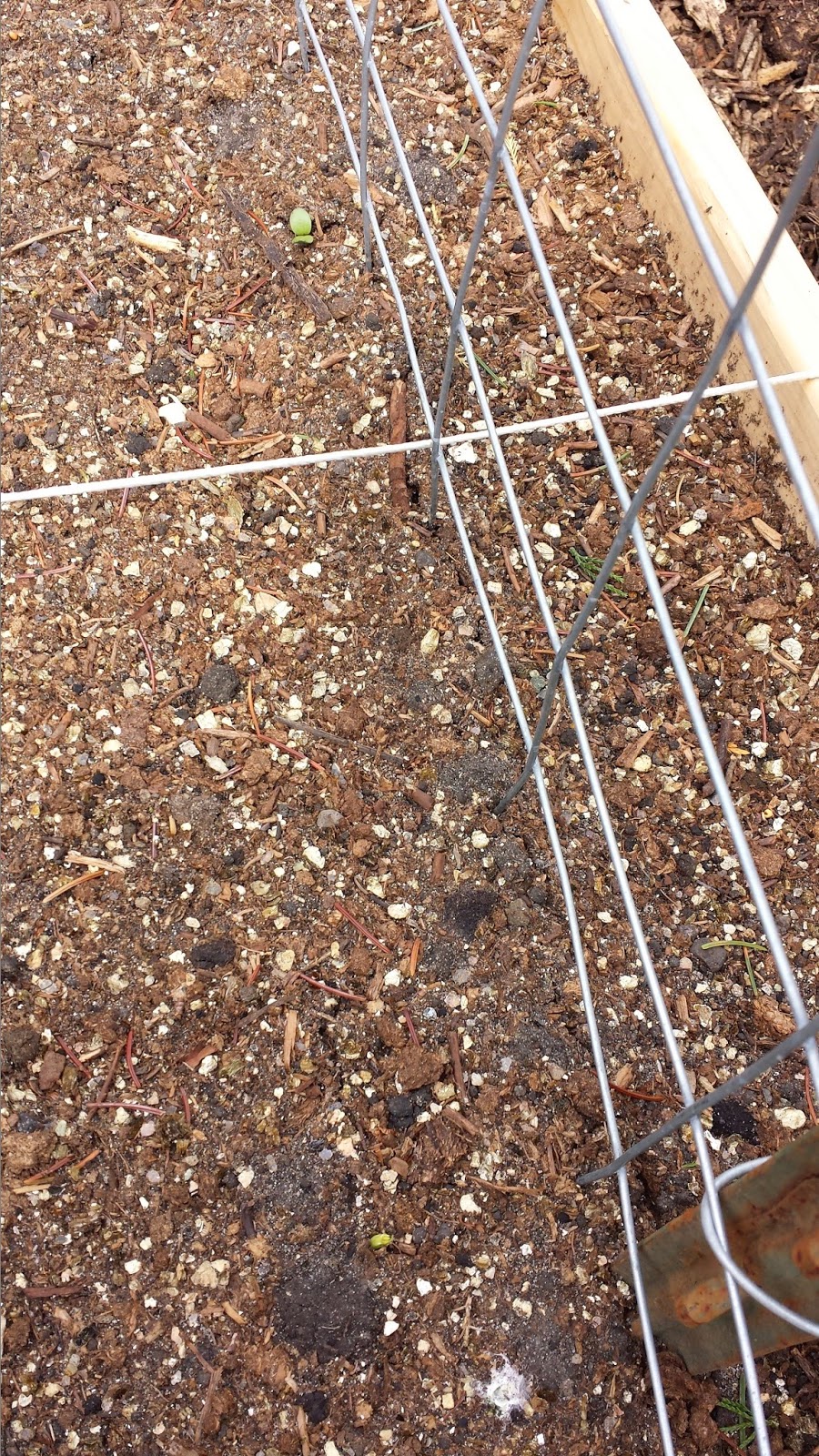