2nd Weekend of May part 2- planting!

I wasn't planning on doing anything to the garden today, let alone plant.  I thought it was still too early, but I went to my mom's for Mother's Day and she and Dad planted everything this morning except peppers and tomatoes.  There's no frost in the 10-day forecast and the farmers are planting.  So while our average last frost date is May 20, I decided to go home and plant this evening.  I don't have everything yet, but I did have carrot and cucumber seeds, and my Opalka tomato from Jung.  We also went to the Garden Center today (kind of a mother's day tradition).  So I bought my herbs for the herb garden and four basil plants, and decided I'd go home and plant them.  I was racing the rain, though.  The sky turned overcast and kept getting darker as the storm got closer.  I really wanted to get everything in before the rain.

I dedicated four squares to Basil because I want to make and freeze a lot of pesto.  Mackenzie loves it, Gavin tolerates it, so we're making it. 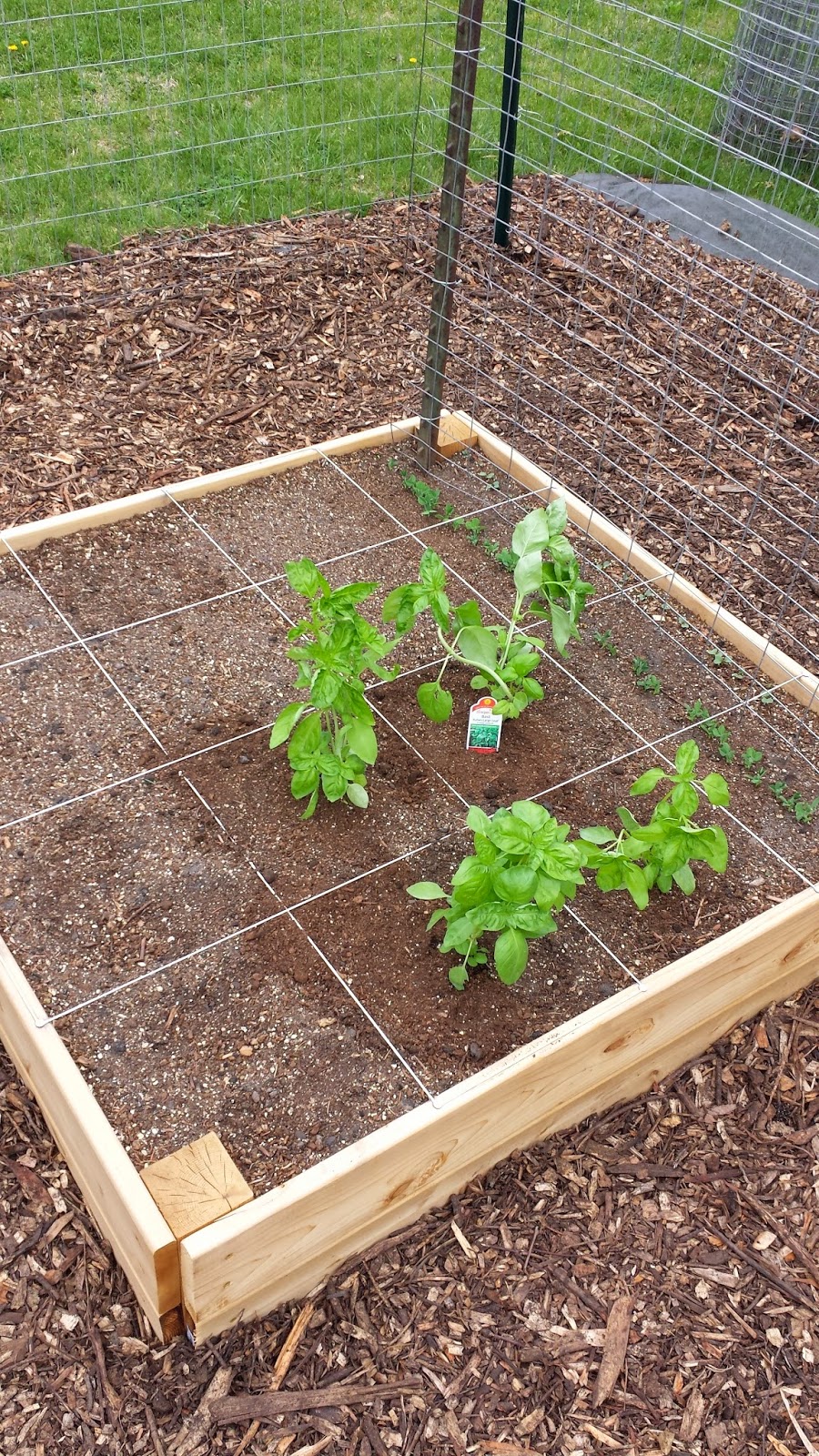 I planted my Opalka tomato.  It turns out that there were four seedlings in that little tray, so I only planted one.  I hope it makes it.  It's so little.  It's supposed to be a good indeterminate paste tomato, but also flavorful for eating. 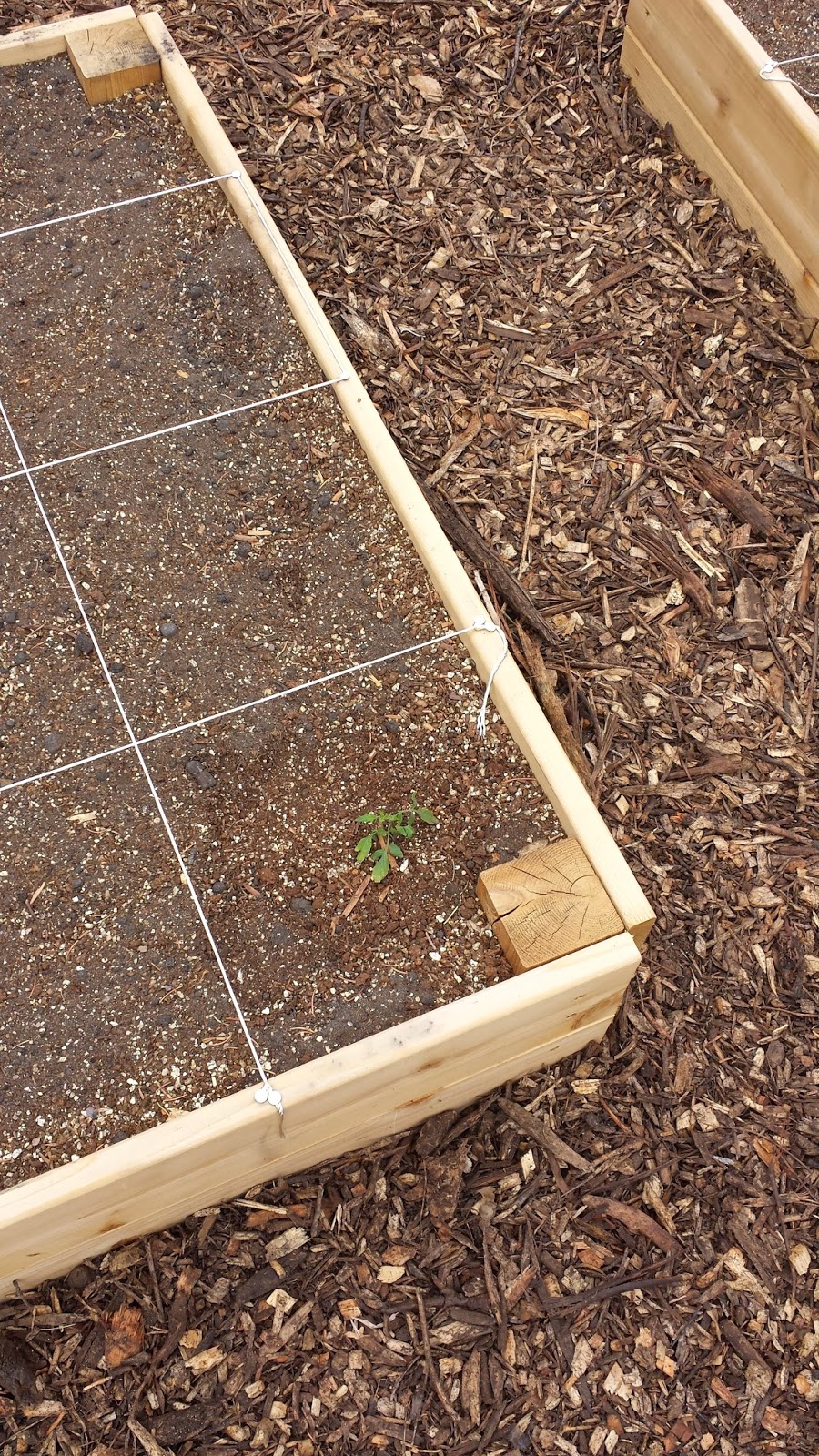 I also bought a "Minibel" tomato, which is only supposed to grow about 12".  The plants were already 12" and flowering, so hopefully I get some good results from that.  It's more of a fun little experiment, really.  New tomato introduced this year, so I want to try it.  Fun concept for someone who can only container garden.  The tomatoes are supposed to be cherry tomatoes, not sweet.  I don't know what kind of production we'll get out of it.  I moved it and the potatoes inside the fence of the garden. 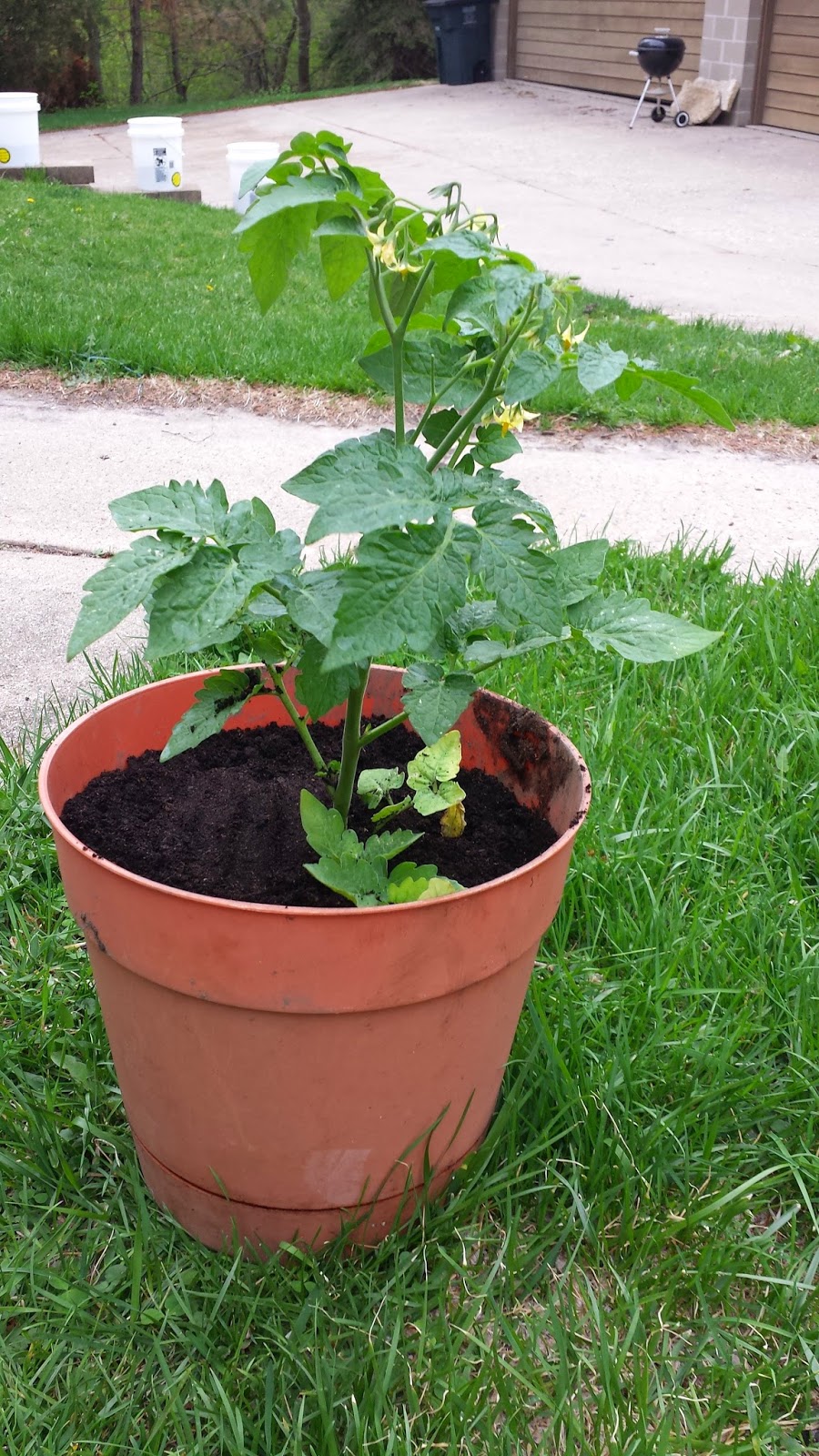 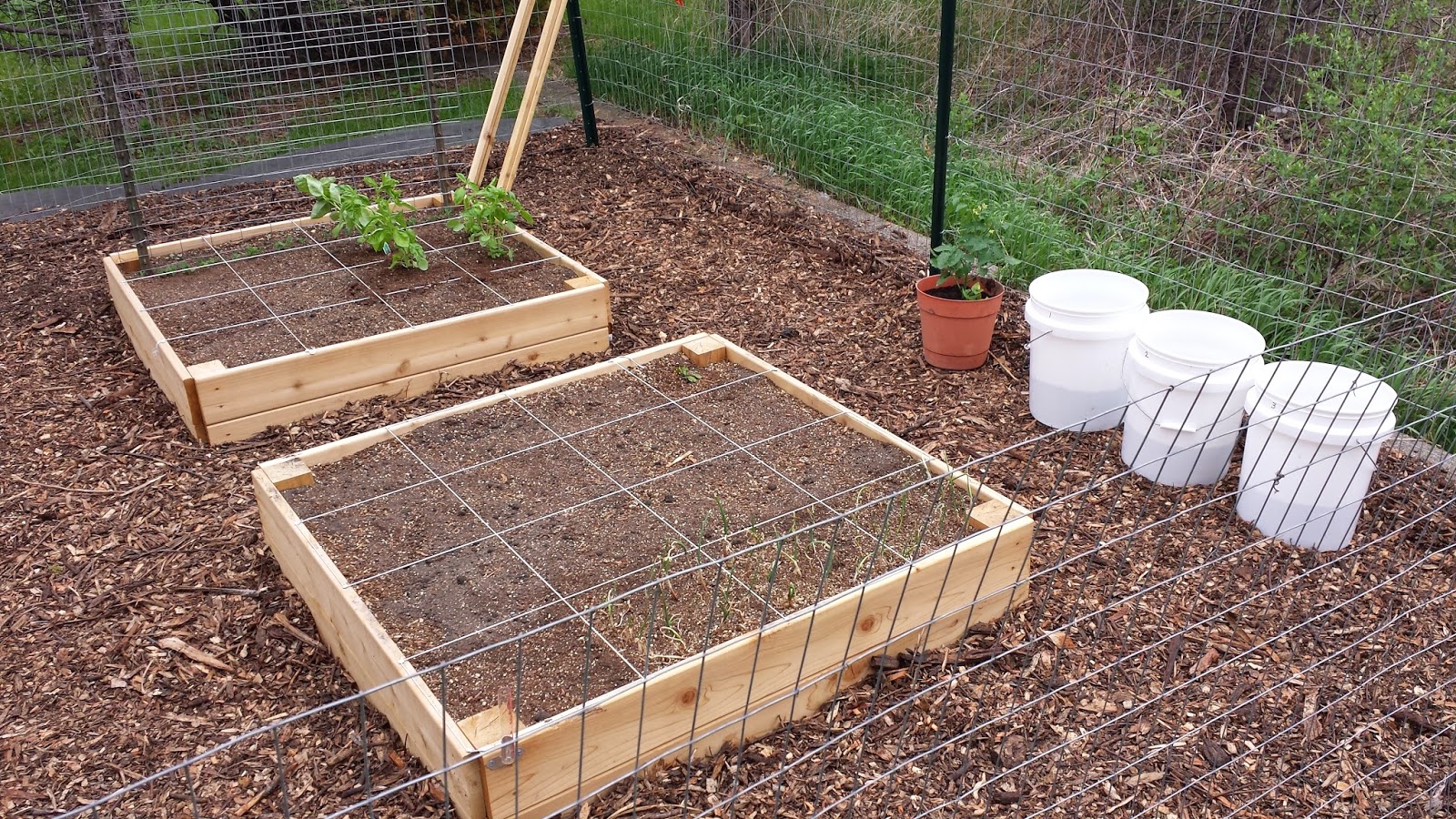 And finally, I bought my herbs for the herb garden.  The only concern I have is whether there's enough sun in front of the house.  That's the west side of the house, so that bed doesn't get sun until the sun comes over the house.  I had chives from last year that survived the winter in a container and my mom brought me some of her oregano.  I also planted lavender, rosemary, lemon verbena, curly parsley, and lemon thyme. 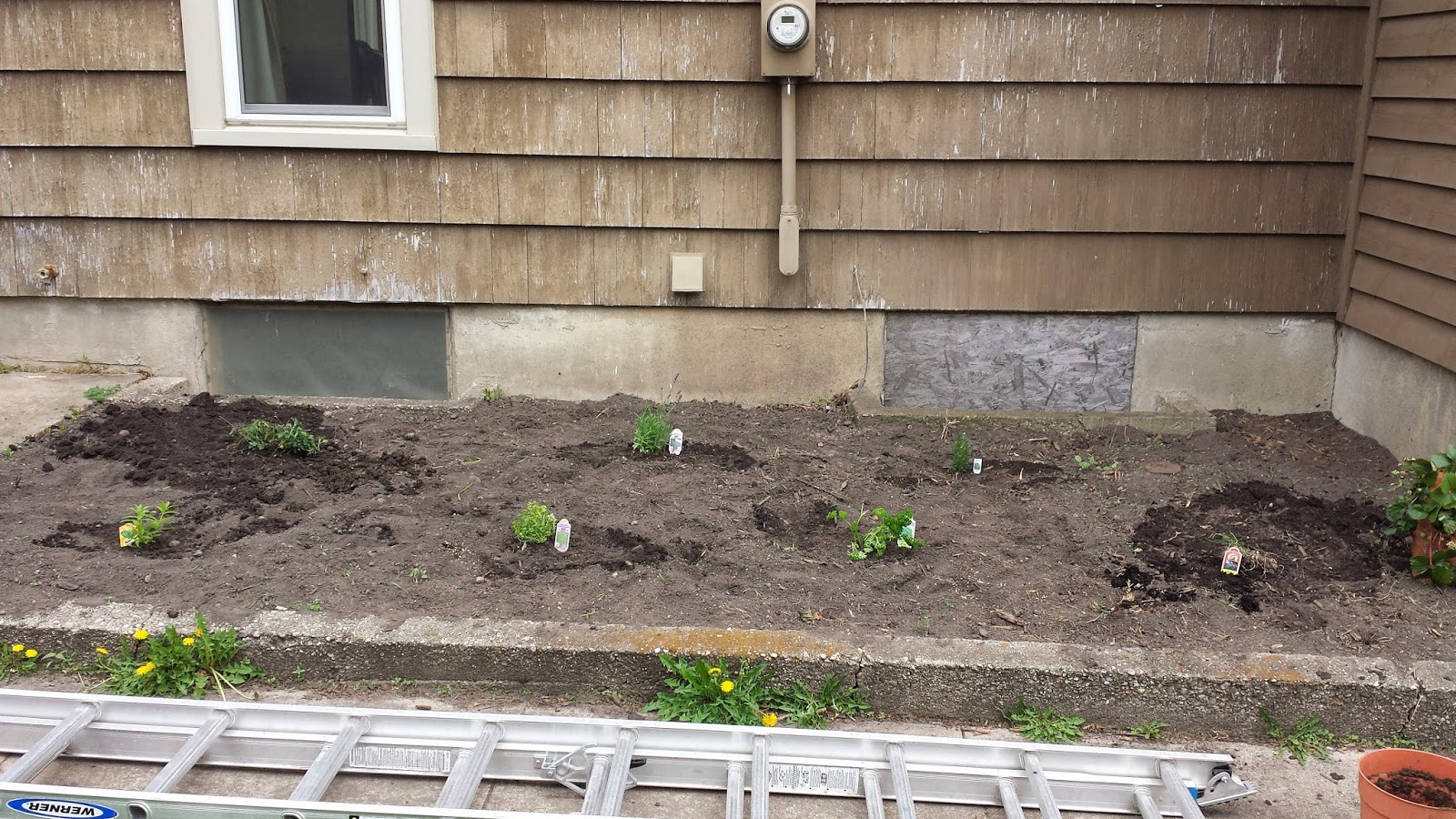 I may mulch around these plants.  Not all of them will survive the winter (most won't) so I'll have to replant next year.  But if I mulch around here it'll be more visually appealing.  Haven't decided yet.  maybe some decorative rocks or something.  So, a quite productive weekend all in all.