2nd weekend of May- Fence gate and more wood chips

Today I had two goals:  I wanted to get the fence gate done and I wanted to get the rest of the wood chips laid down in my garden.  We accomplished the fence gate, but still need about a wheelbarrow's worth of wood chips.  Mike and Gavin went to the compost site and got more, but just not quite enough.  Gavin insisted on being the only one to scrape the wood chips from the back of the truck bed to the middle where I could reach them with the rake.  Took a little longer, but how can I say no to his desire to do some manual labor?  When we were done, he took a broom to the truck bed to get all the rest of it out.  He was a good little helper today. 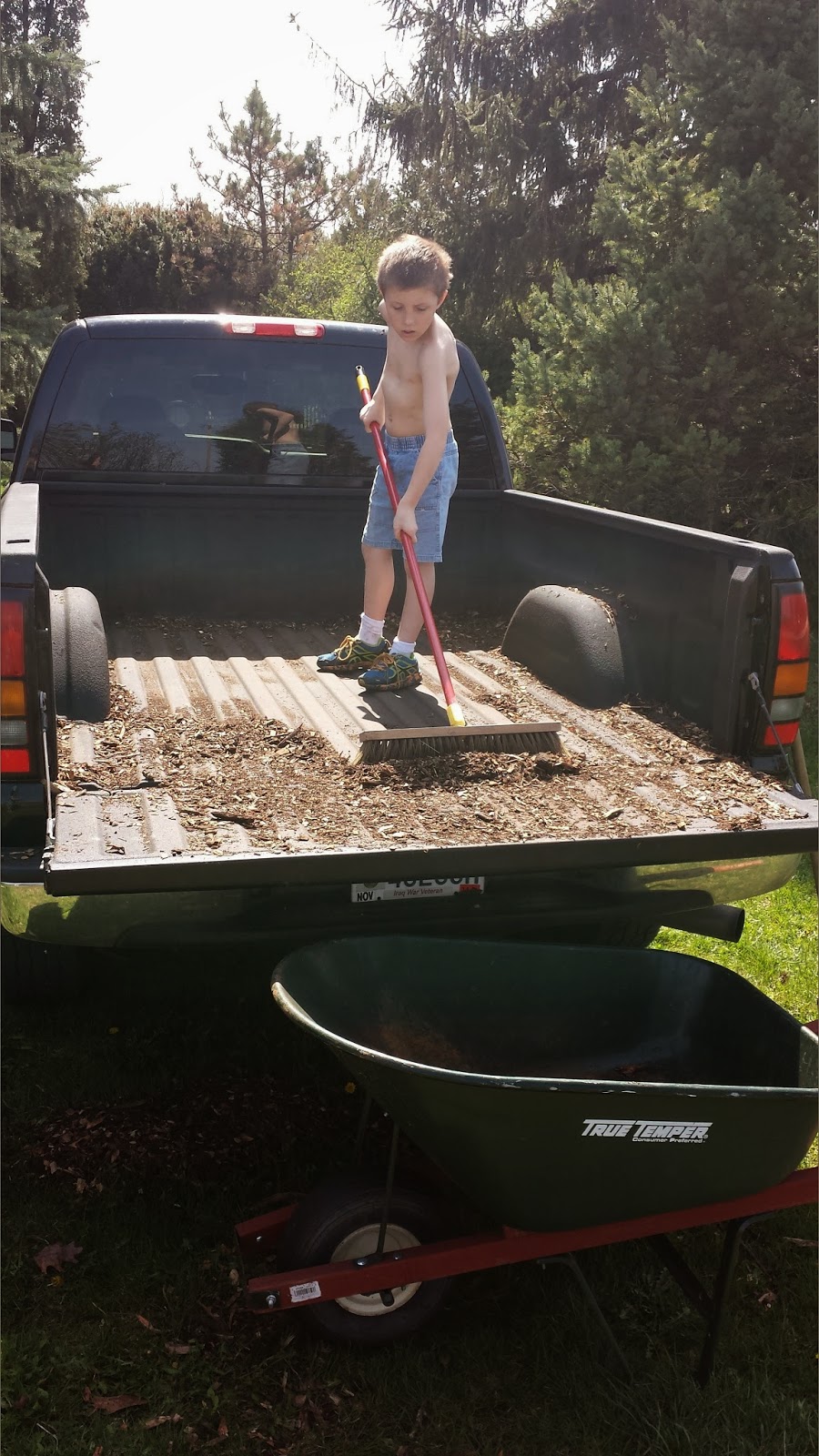 I don't think I'm going to be able to get the rest of the wood chips next Saturday because we're going up to Green Bay for my marathon, and Mike has a drill weekend, so he won't be home.  Sounds like it'll have to wait for Memorial Day weekend, which is also when I plan to plant.

The garden is doing well.  I've been watering, and it seems like the peas grow a little each day.  Most of the seeds germinated.  A few of the radishes didn't, but I'll plant more of them when I harvest this first batch. 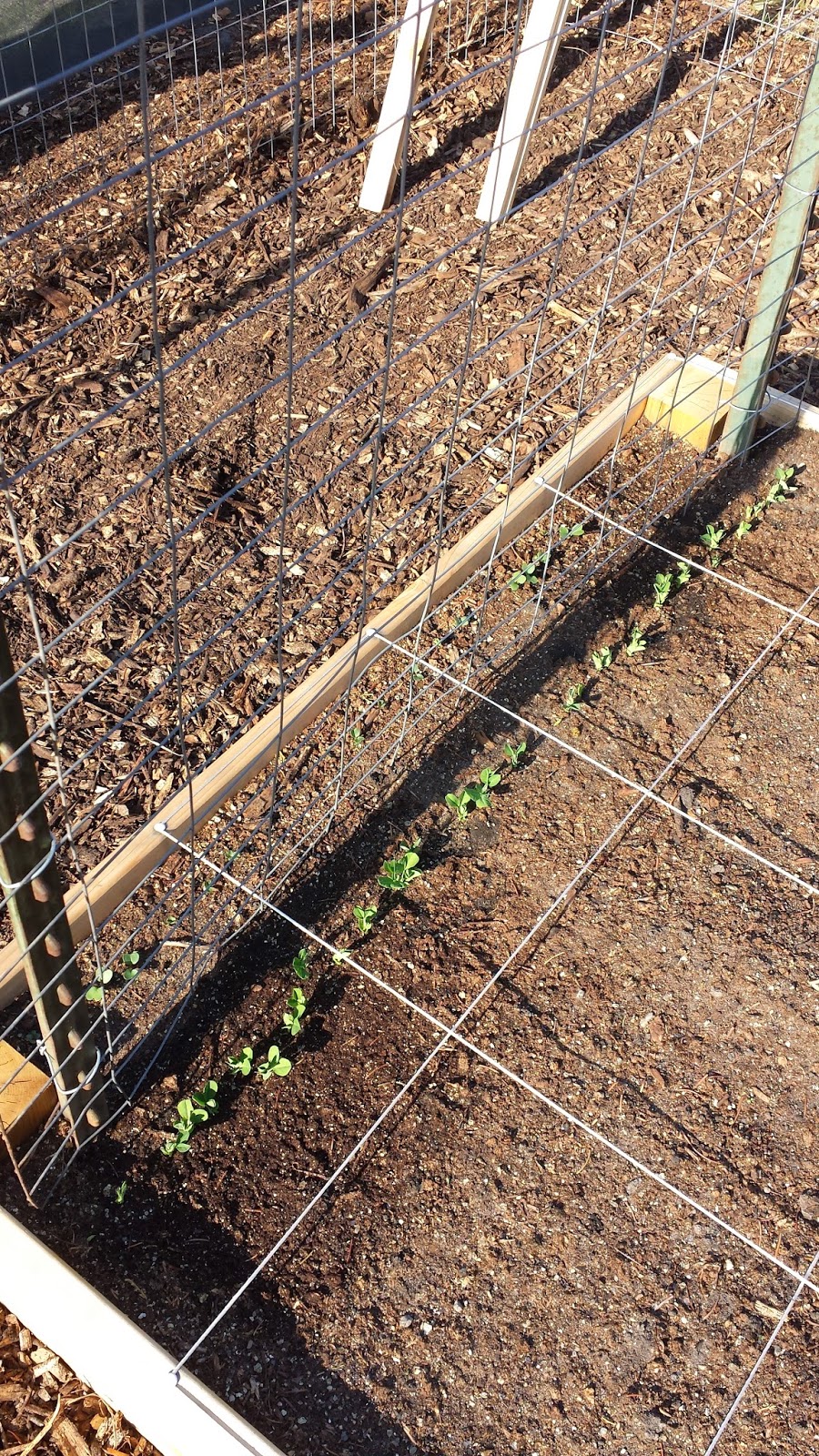 So the fence gate was an interesting task because we didn't really know exactly how to make it or install it with the metal fence posts we have in the garden.  But what we ended up with will work, while maybe not the prettiest gate ever made.  It has character, which makes it unique, so therefore I like it.  We used some of the 1x2 cedar boards I bought for the trellis.  Turns out I don't need as much wood for the trellis, so I had extra.  When we put the diagonal cross piece in, it ended up skewing the sides a little, so we ended up with a door that was not quite square.  Add that to the not-quite-straight fence posts, and we have some gap.

We hammered 3/4" staples to attach the fencing to the frame. 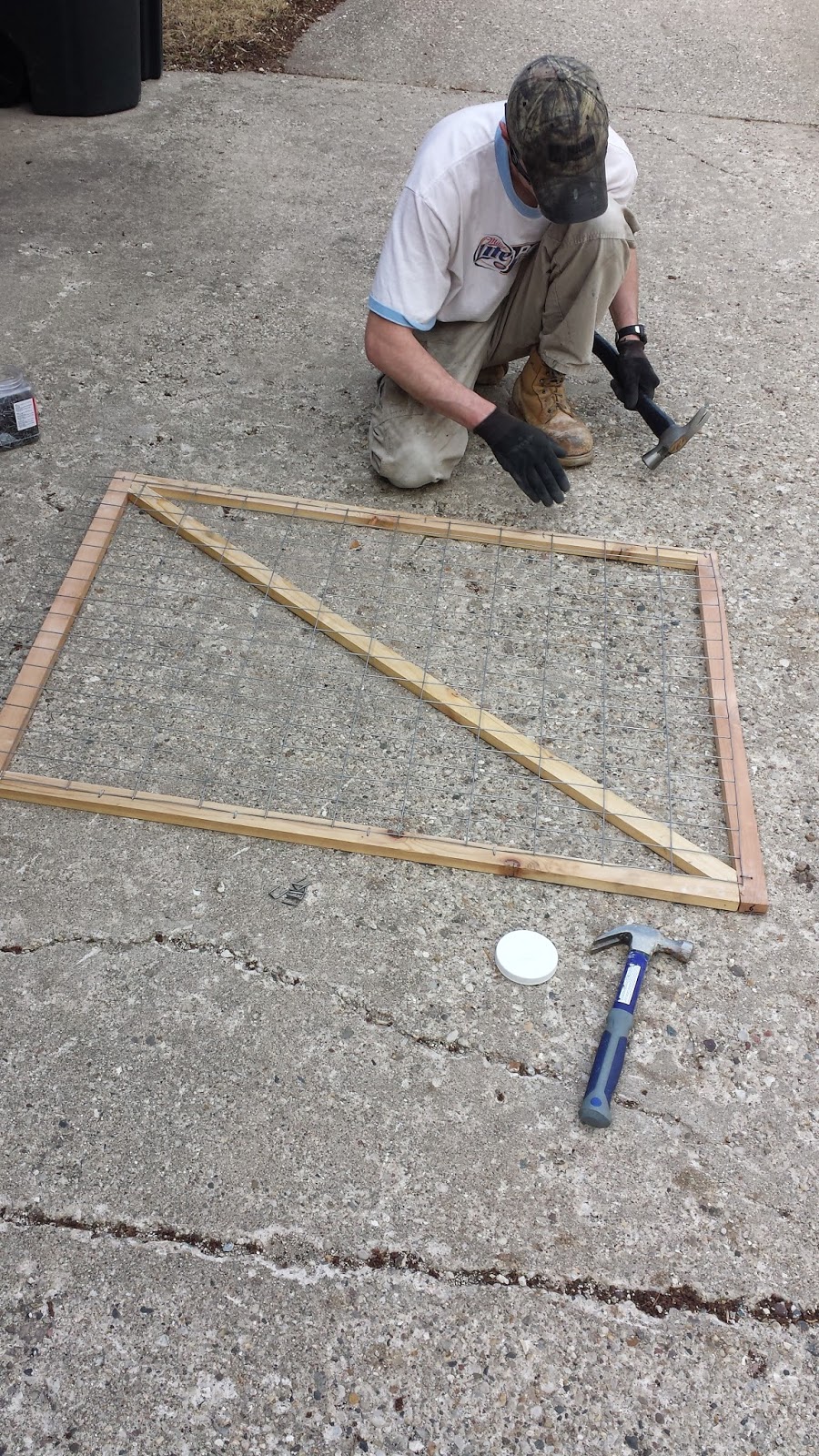 We attached a piece of the 1x2 cedar board to a metal fence post that had holes in it with 1/4" bolts.  We attached the door to the cedar board with two hinges. 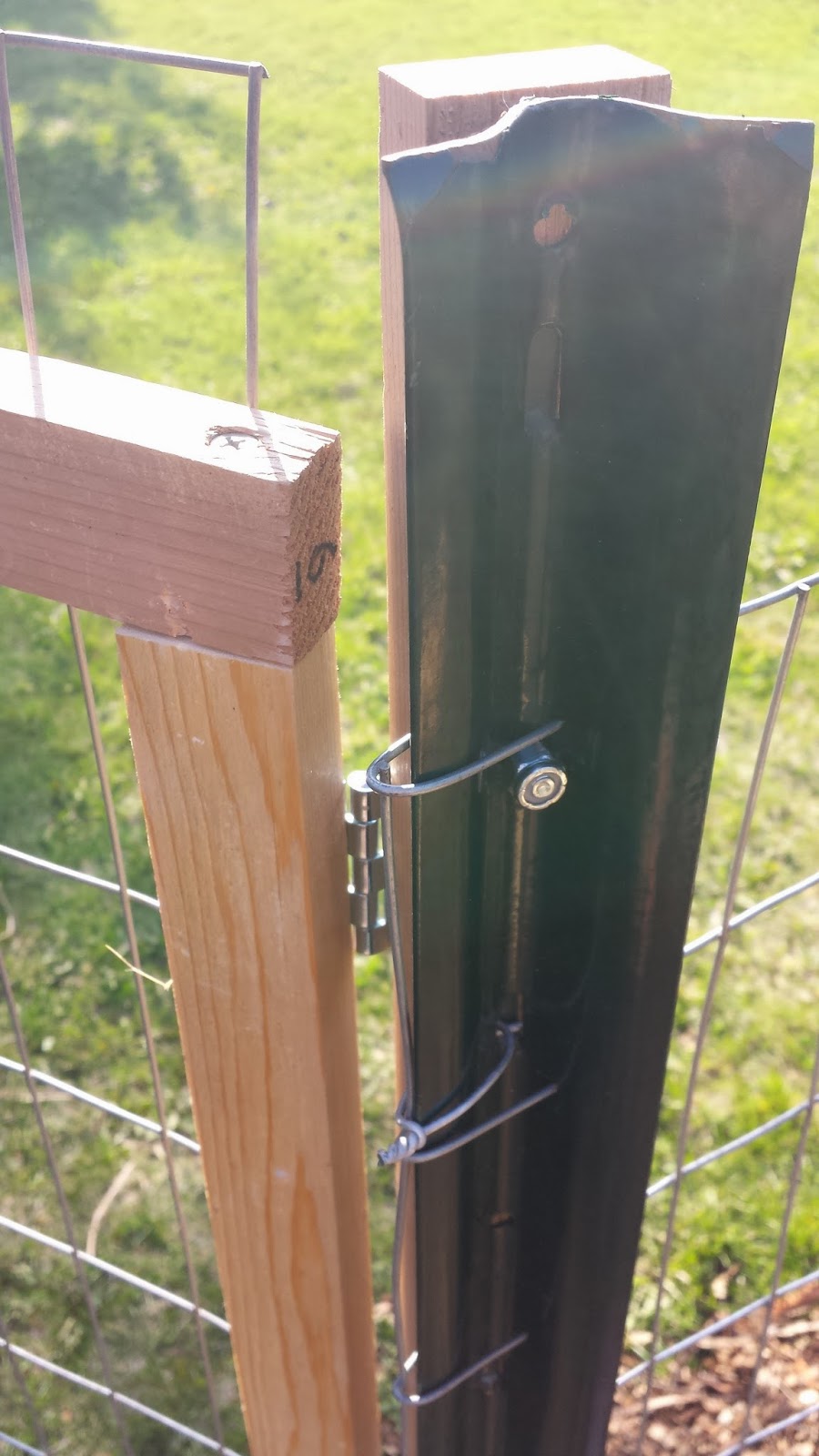 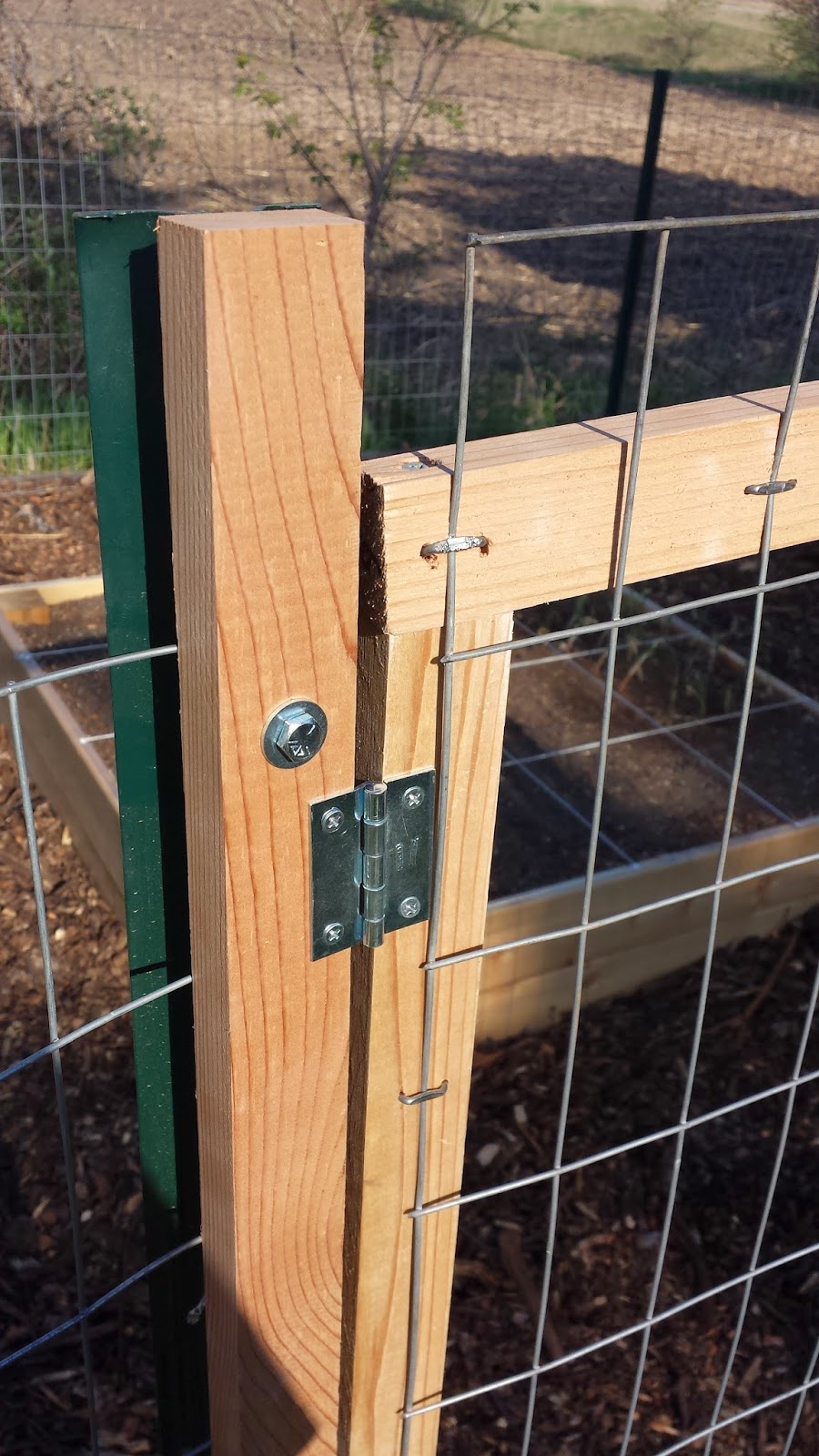 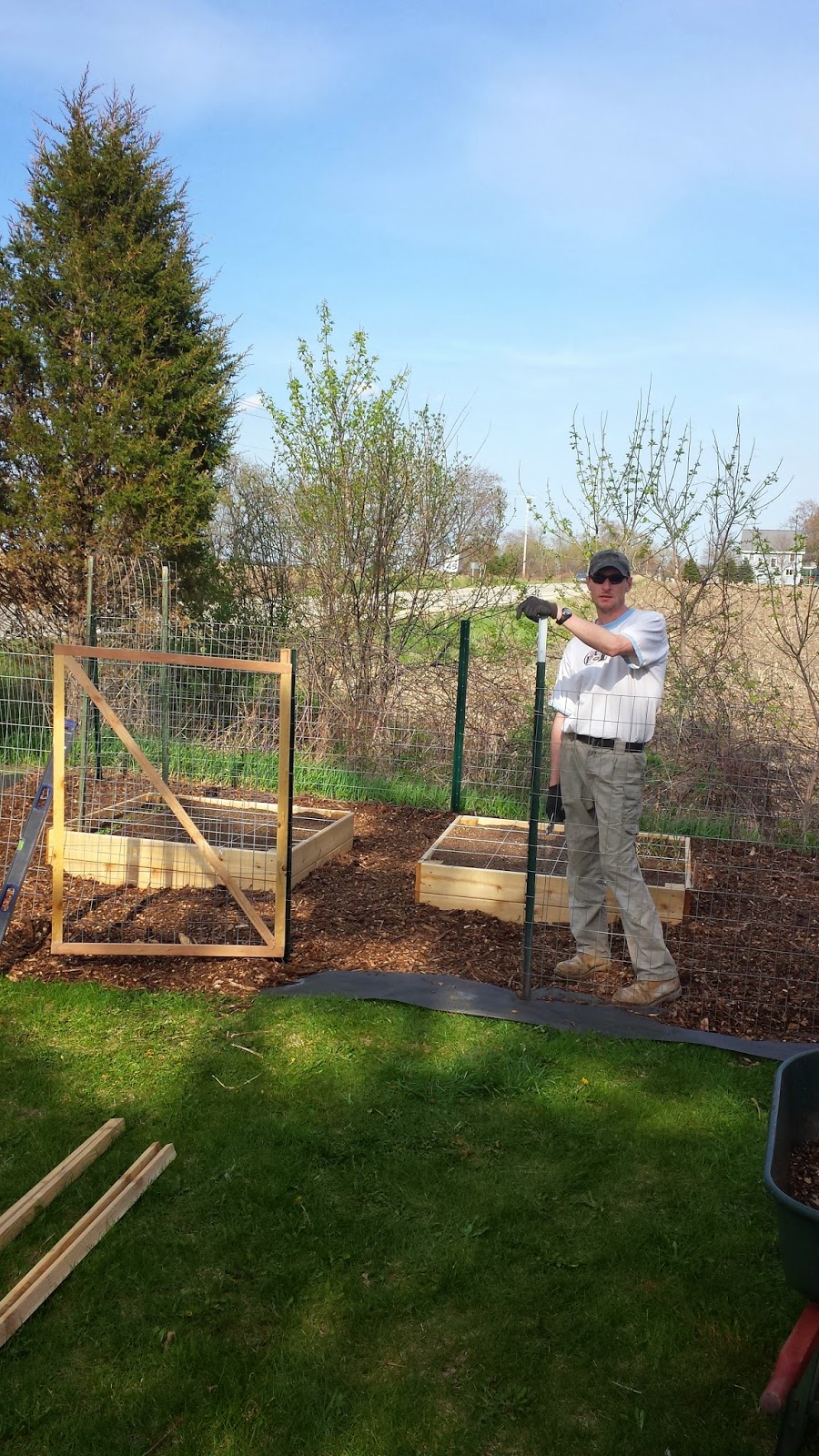 We put another metal fence post in where the gate would latch, but it was one of the old ones, and didn't have the holes.  We were also out of the cedar boards, so we were having a hard time figuring out how to latch the door.  Mike cut down some pines last year and had some branches on the wood pile, so we took a longer one about 3 inches in diameter and used that.  We attached it to the post with wire.  There was no using bolts this time since we didn't have any holes in the post. 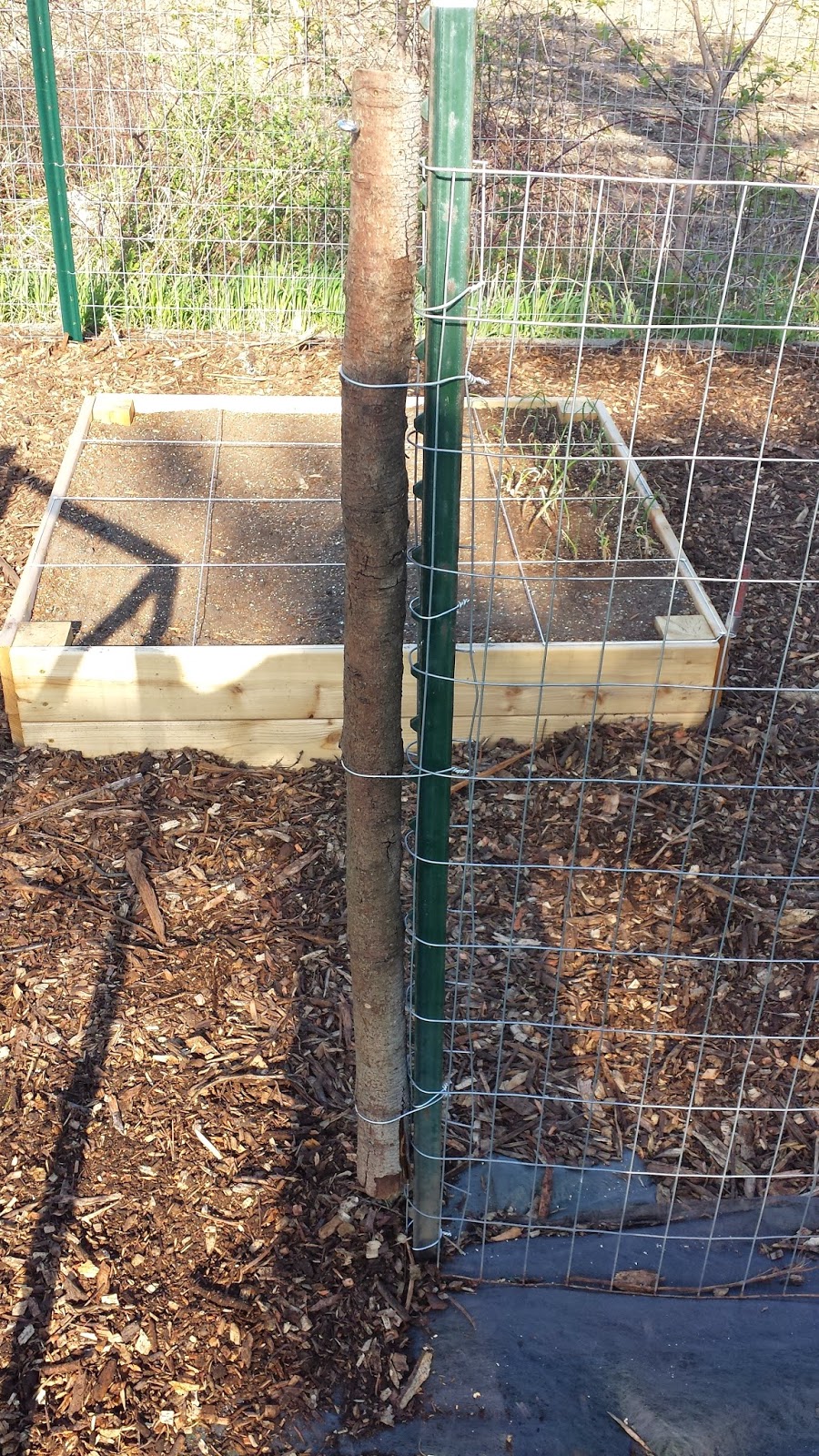 We used an eyebolt latch to hook the gate to the pine branch.  Not the prettiest, but again, it works. 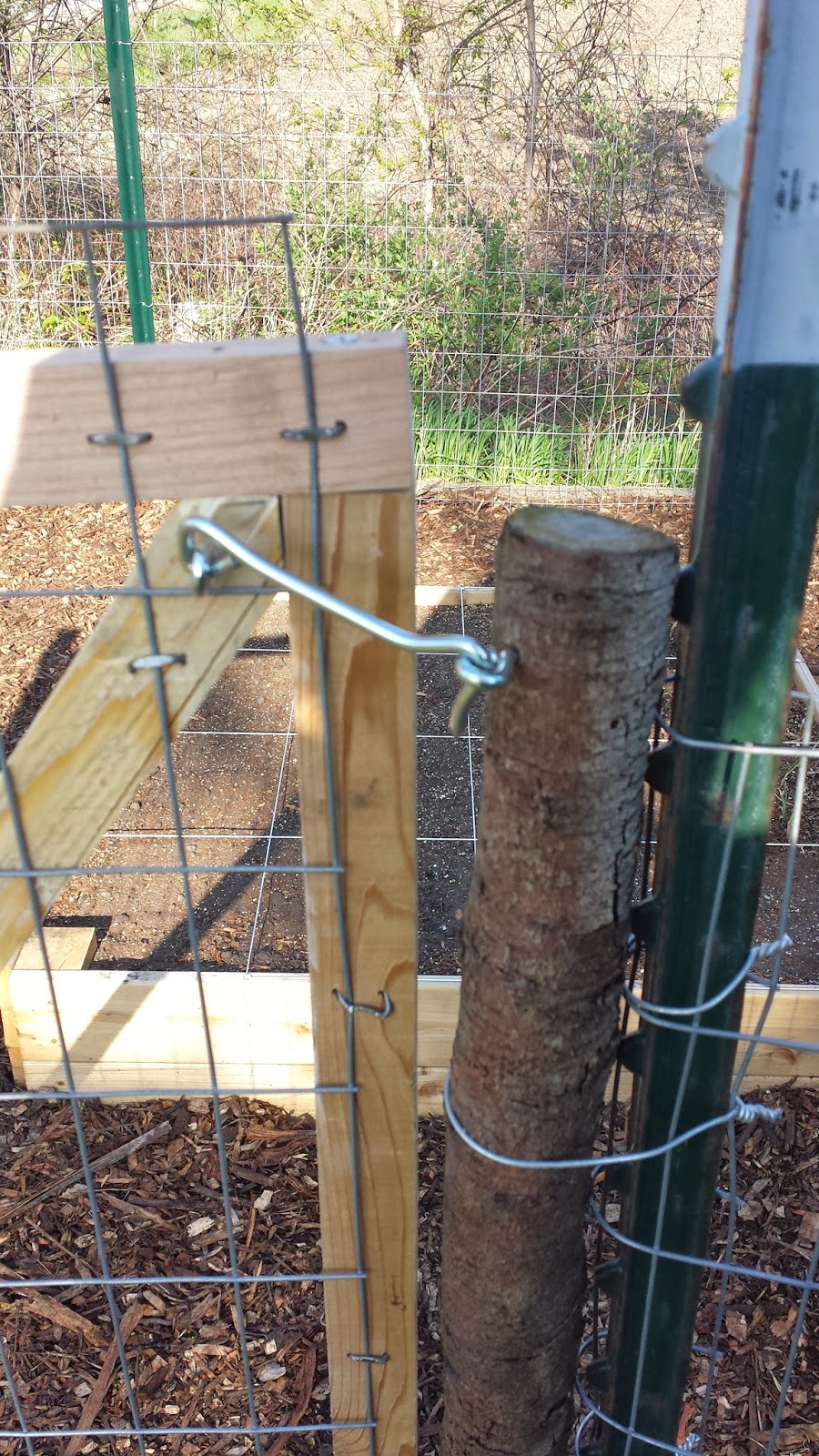 So now we have a gate, and yes, it's crooked.  But like I said, it adds character.  It might not be as noticeable when I get the wood chips and fill in under the gate. 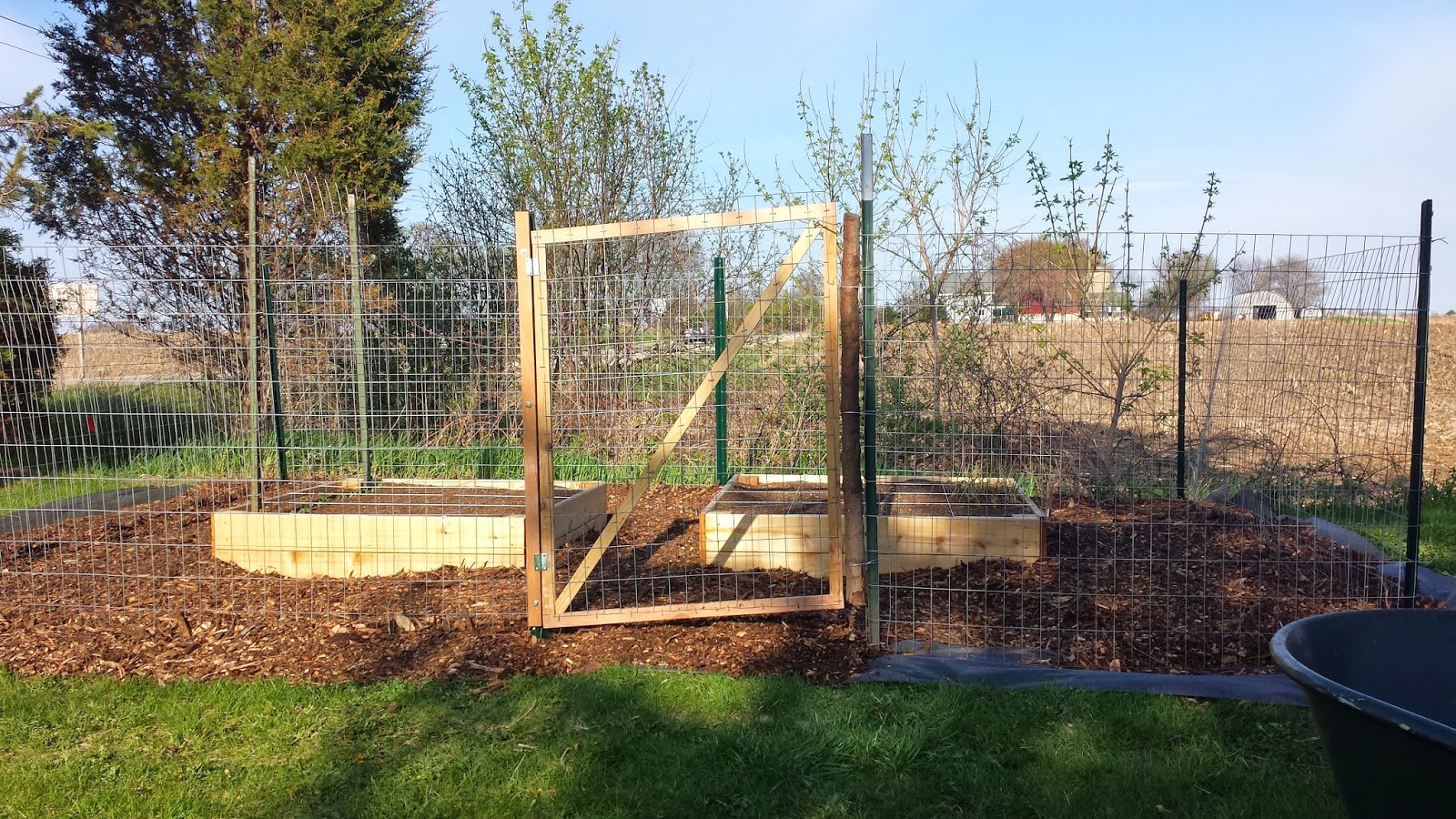 Then again, maybe it will still be noticeable.  But at least we have a functioning gate with a nice little rustic appeal.  It's definitely unique.  No one else will have one like it!

In other news, I got my order from Jung today.  I ordered an Opalka tomato, an indeterminate paste tomato, and a Sweet Baby Girl tomato, a cherry tomato for Gavin.  What I received was an Opalka and a Super Heavyweight pepper. 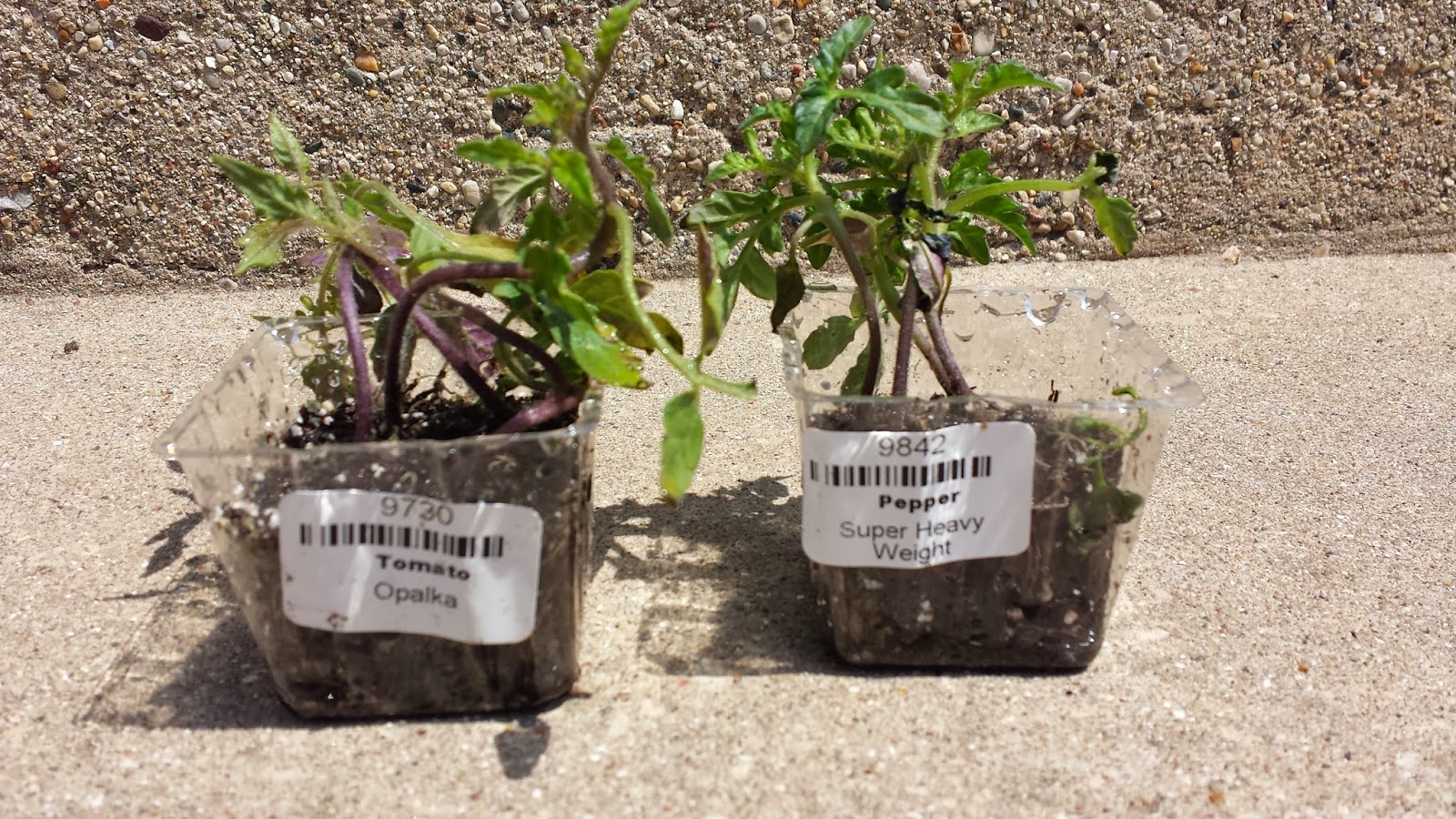 So I'm hoping that they will send me my Sweet Baby Girl tomato when I get a hold of someone there.  If the Jung order shipped, it must mean my Burpee order will ship soon, too.  I have several tomatoes and peppers coming from Burpee.  My biggest challenge in the next two weeks is keeping these little seedlings alive before planting time.