Haven't blogged in quite a while, and while I am training for the Green Bay Marathon next month, I've been too busy to blog about it.  But with Spring here and the weather warming up, I am getting excited about planting time.  Last year I had a garden at the bottom of the hill in the back of the house.  It was my first real garden and I was really excited about it. 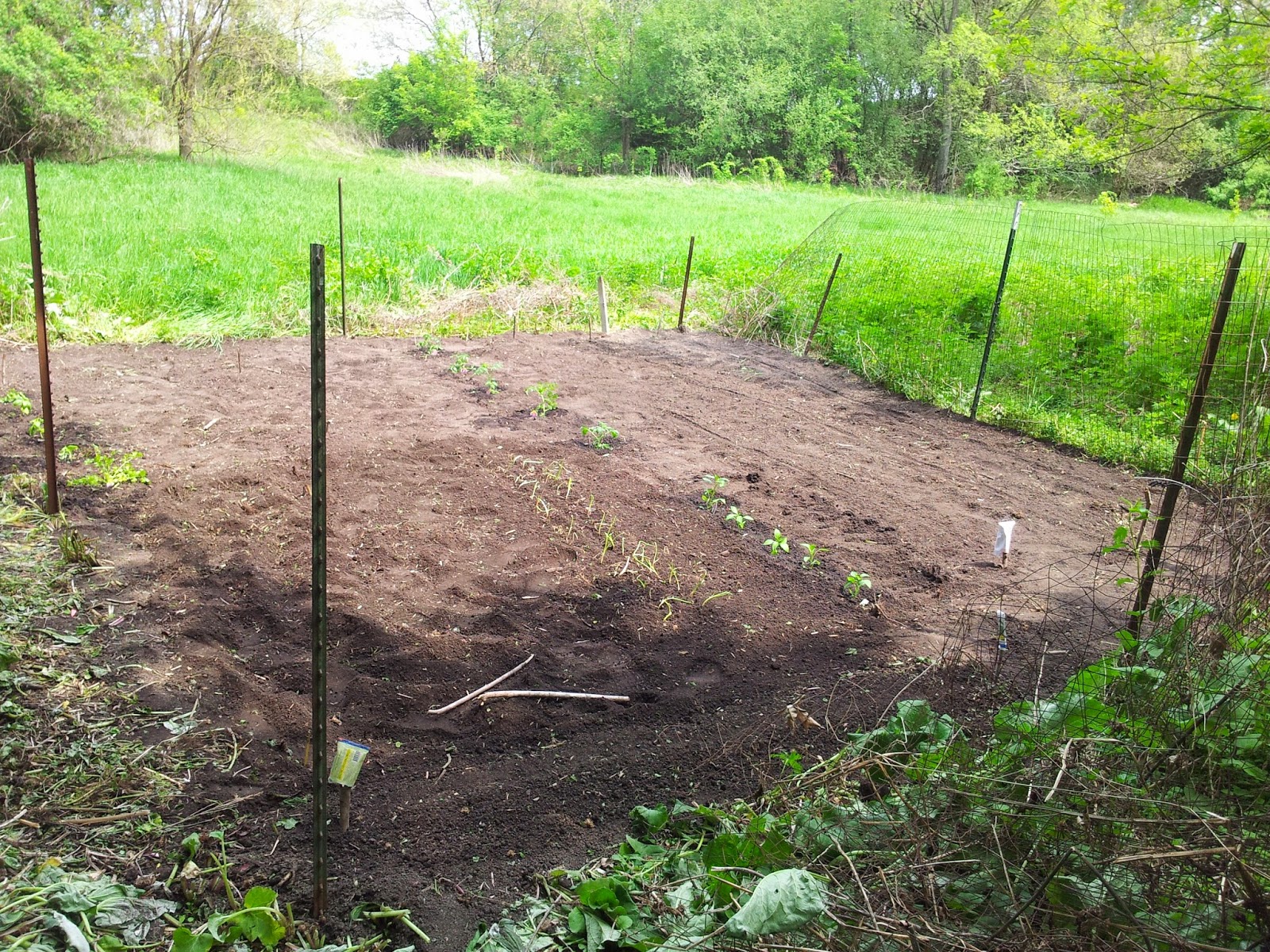 It ended up flooding and was under water for three days.  After that, it was mosquito hell, and I didn't even want to think about going down to harvest the tomatoes off the only two plants that survived. 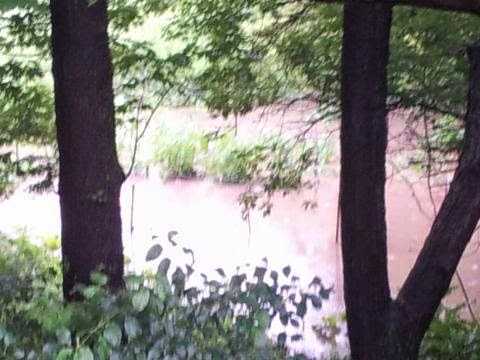 So this year I moved the garden up to the yard, and decided to do raised beds.  This is mostly because the part of the yard that gets enough sun has too many roots to till up.  And I really like the idea of growing up a trellis, so I'm going to grow the tomatoes, cucumbers, beans and peas vertically.

Mike and I bought all the materials last Saturday afternoon, but I ended up doing a lot of the calculations at the store because the beds are a little higher than I originally planned for.  I was hoping to get 1x8" cedar planks, but they only had 1x6."  I know the book says you only need a 6" deep bed, but I wanted to grow some carrots and I wanted them to be able to go a little deeper than just 6."  I decided on the spot to buy enough lumber to make the beds 12" tall (well actually, only about 11.5" tall because a 1x6 is really more like 1x5.75) and so I recalculated the soil requirements and ended up coming up short.  I should have calculated for 12".  I will need one more bag of vermiculite to finish off the second bed. 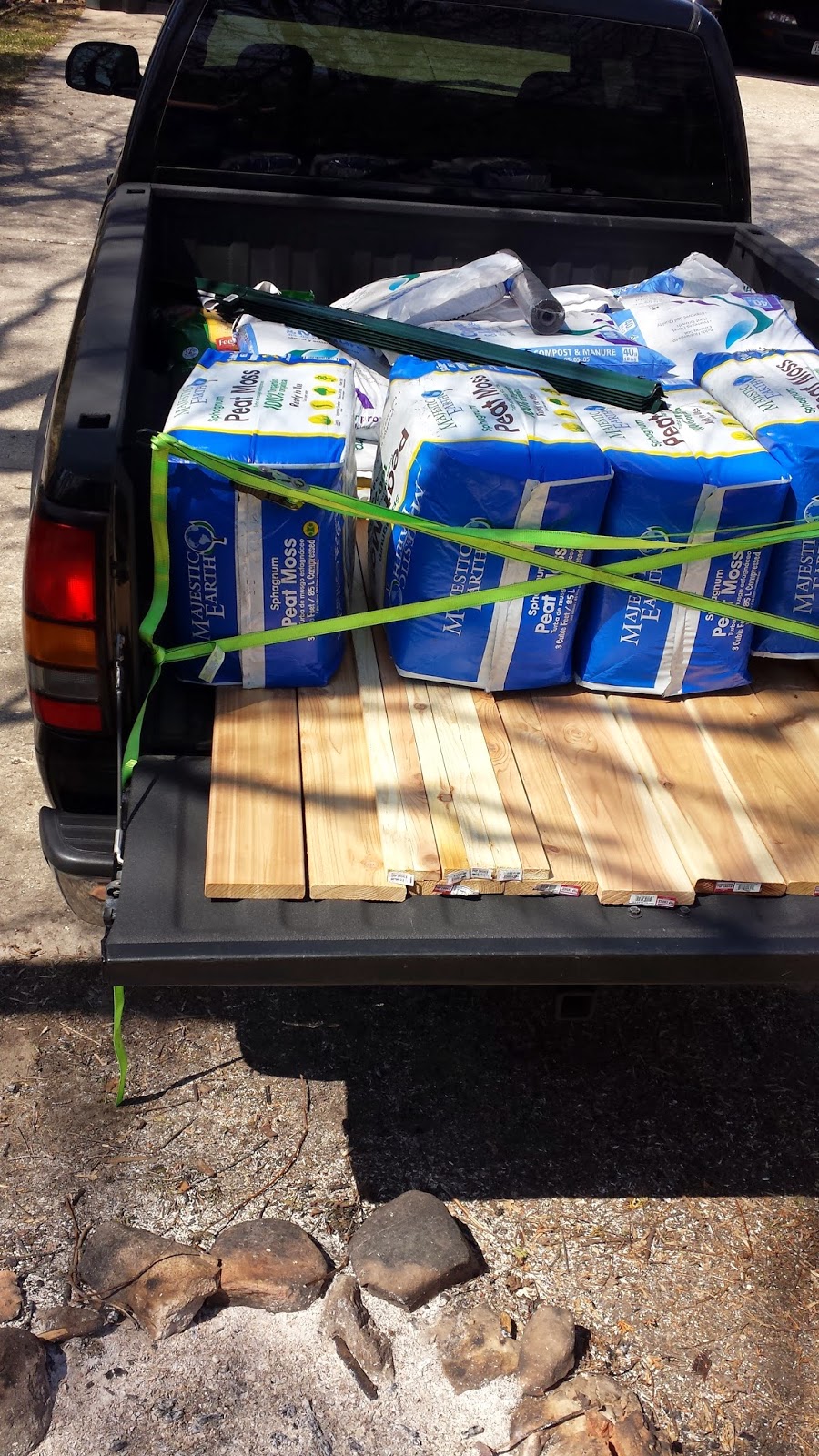 We also bought weed barrier, 1x2" cedar lengths for a trellis, 4 x 3 cubic feet bales of peat moss, 16 bags of compost (a little extra in there for my herb garden), and 8 bags of vermiculite. 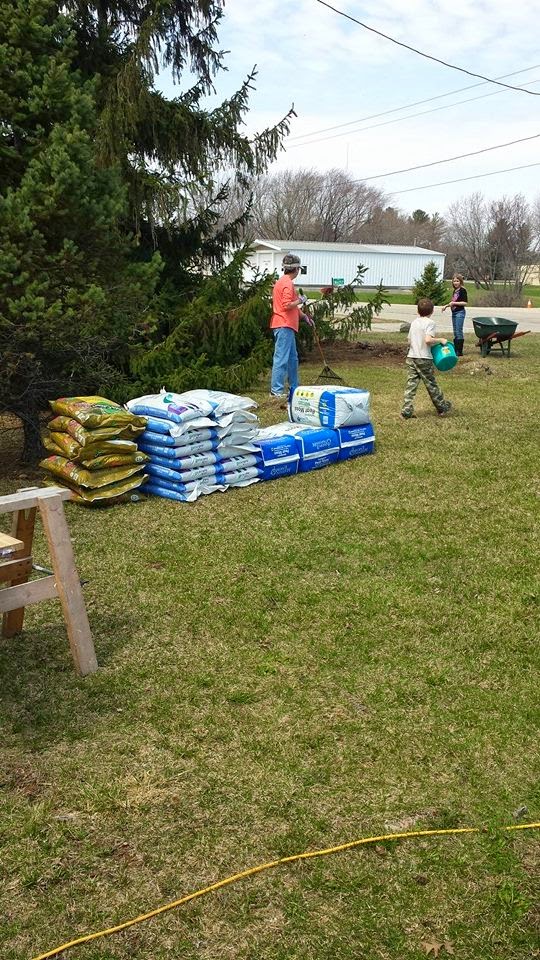 Mike hauled all his tools and saw horses and miter saw and extension cords outside so we could work out where the garden was going.  We cut the boards to length, screwed them together with 4x4 cedar posts for the corners, and made our raised beds. 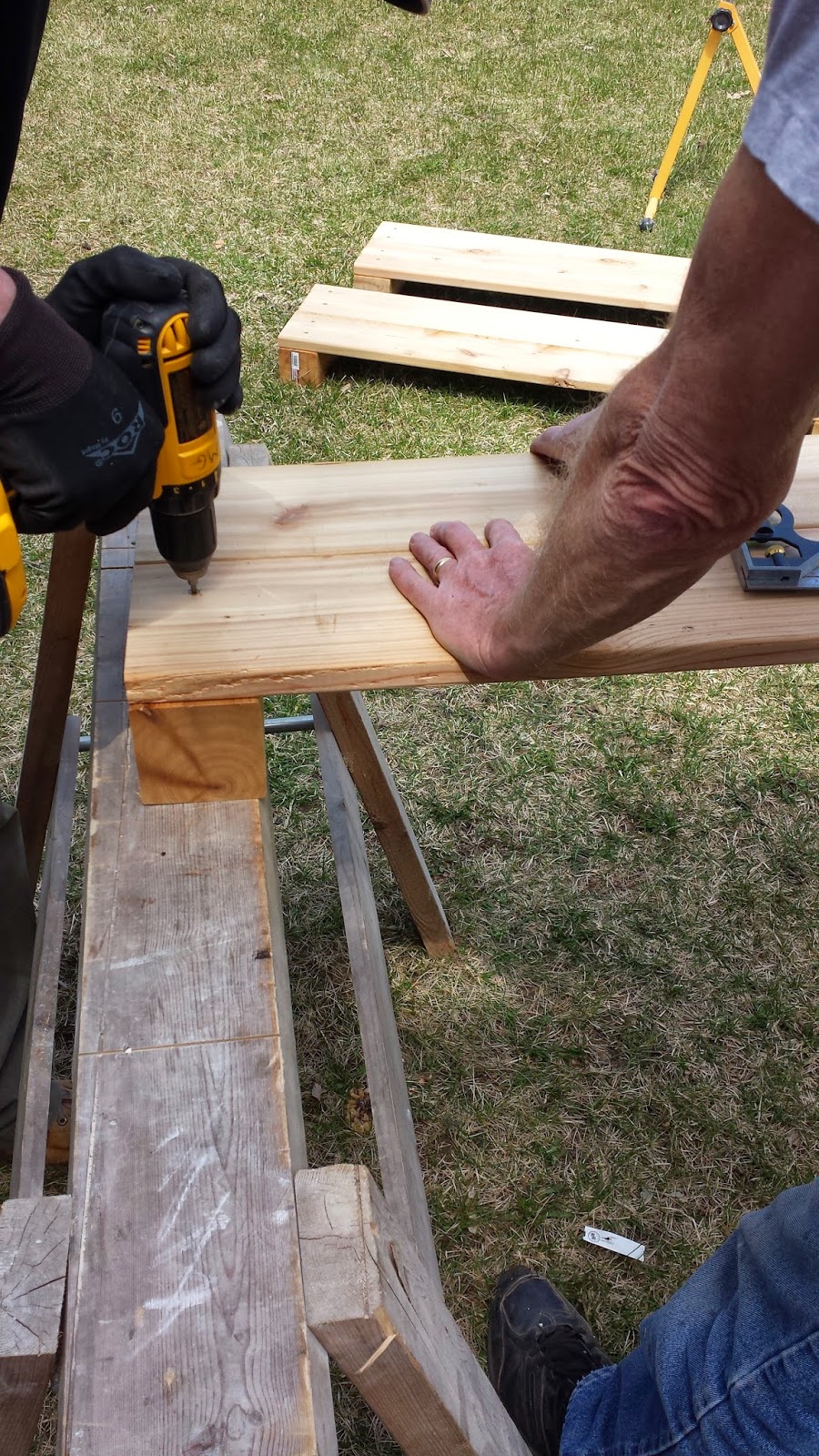 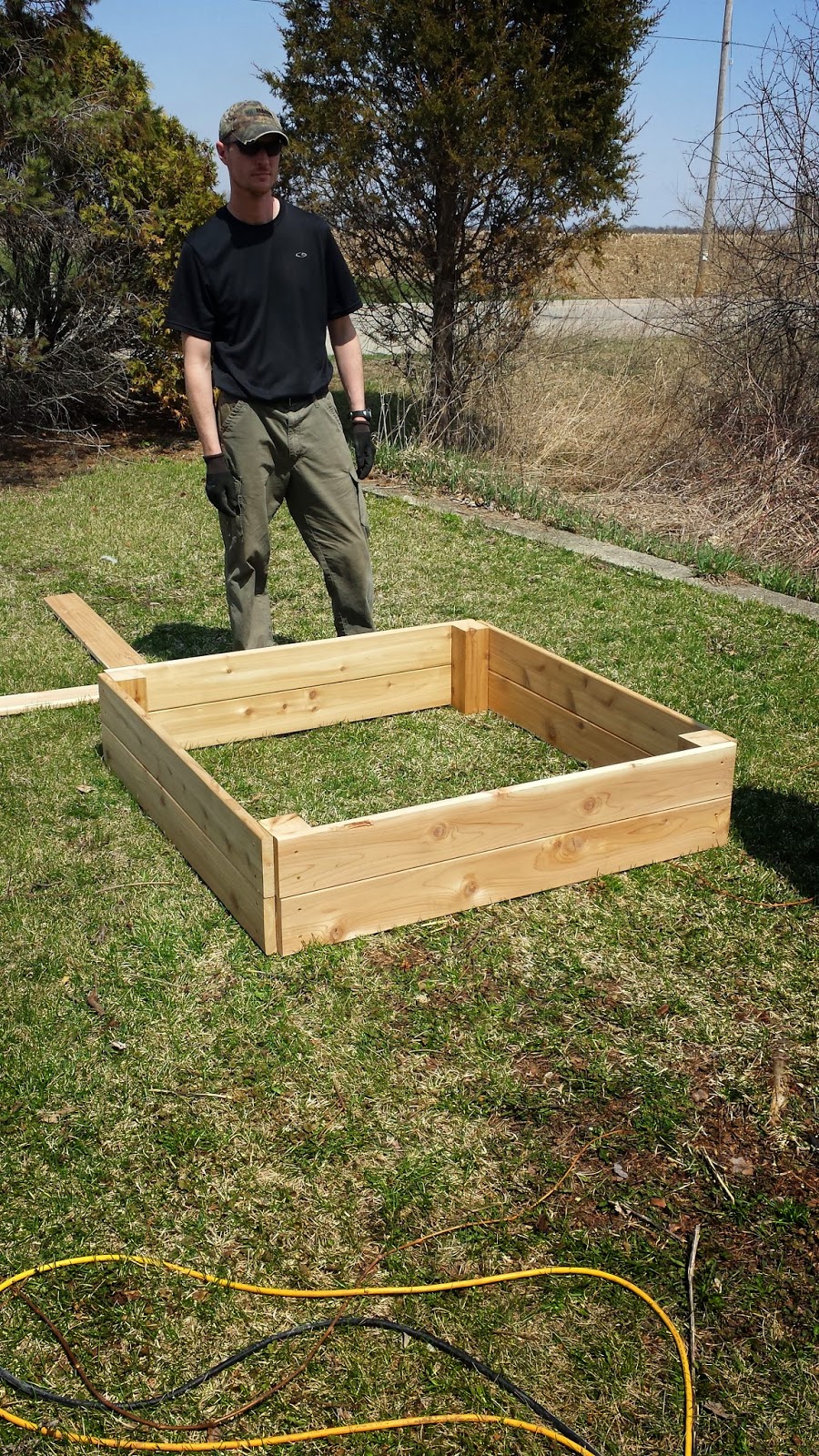 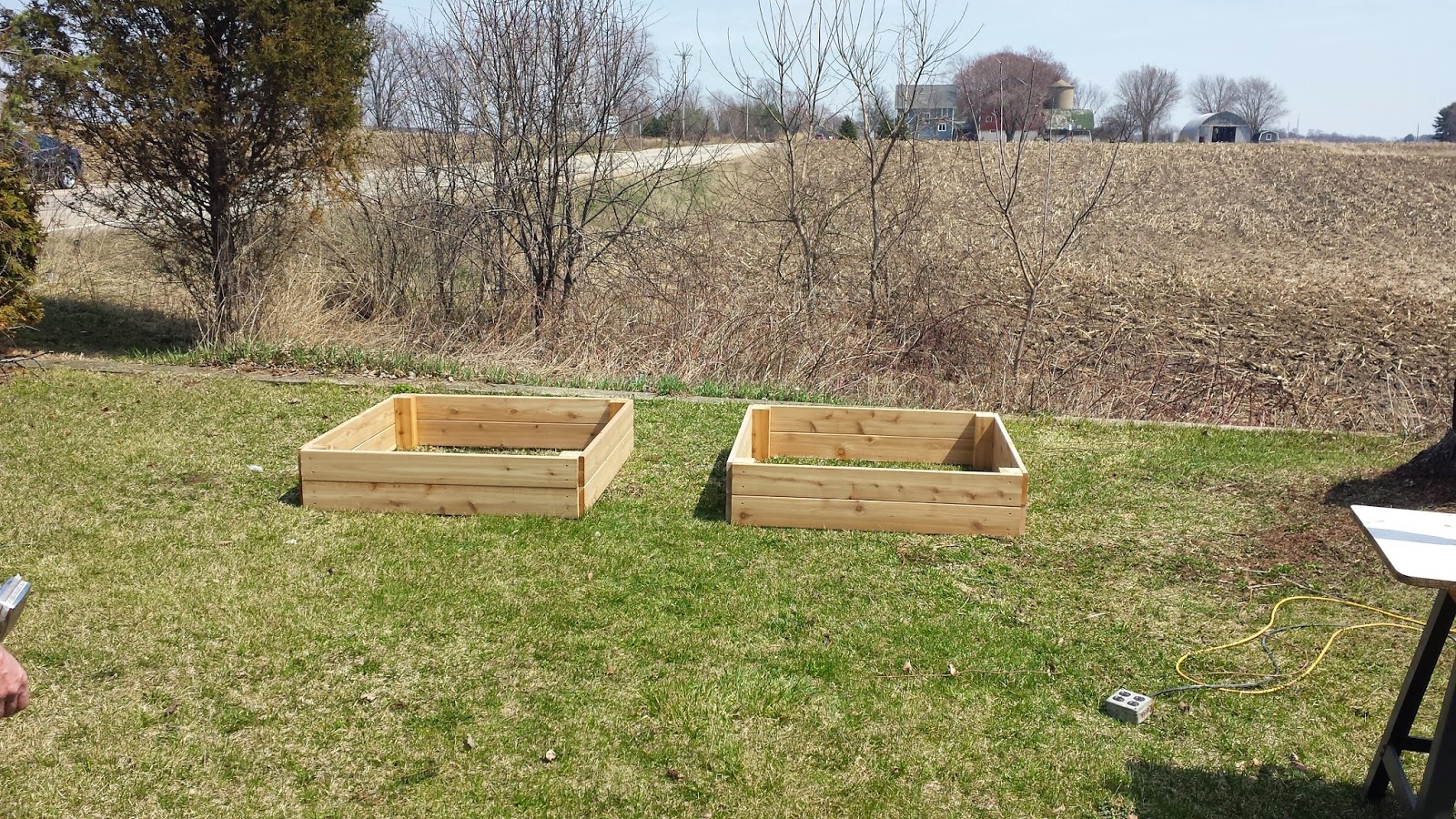 So then we wanted to put the weed barrier down and it turns out I didn't have enough.  I bought a 3x50' roll, but then I ended up deciding to put a little more distance between the beds and the fence, so we needed more.  But I was able to at least get enough under the beds so we could get the soil in. 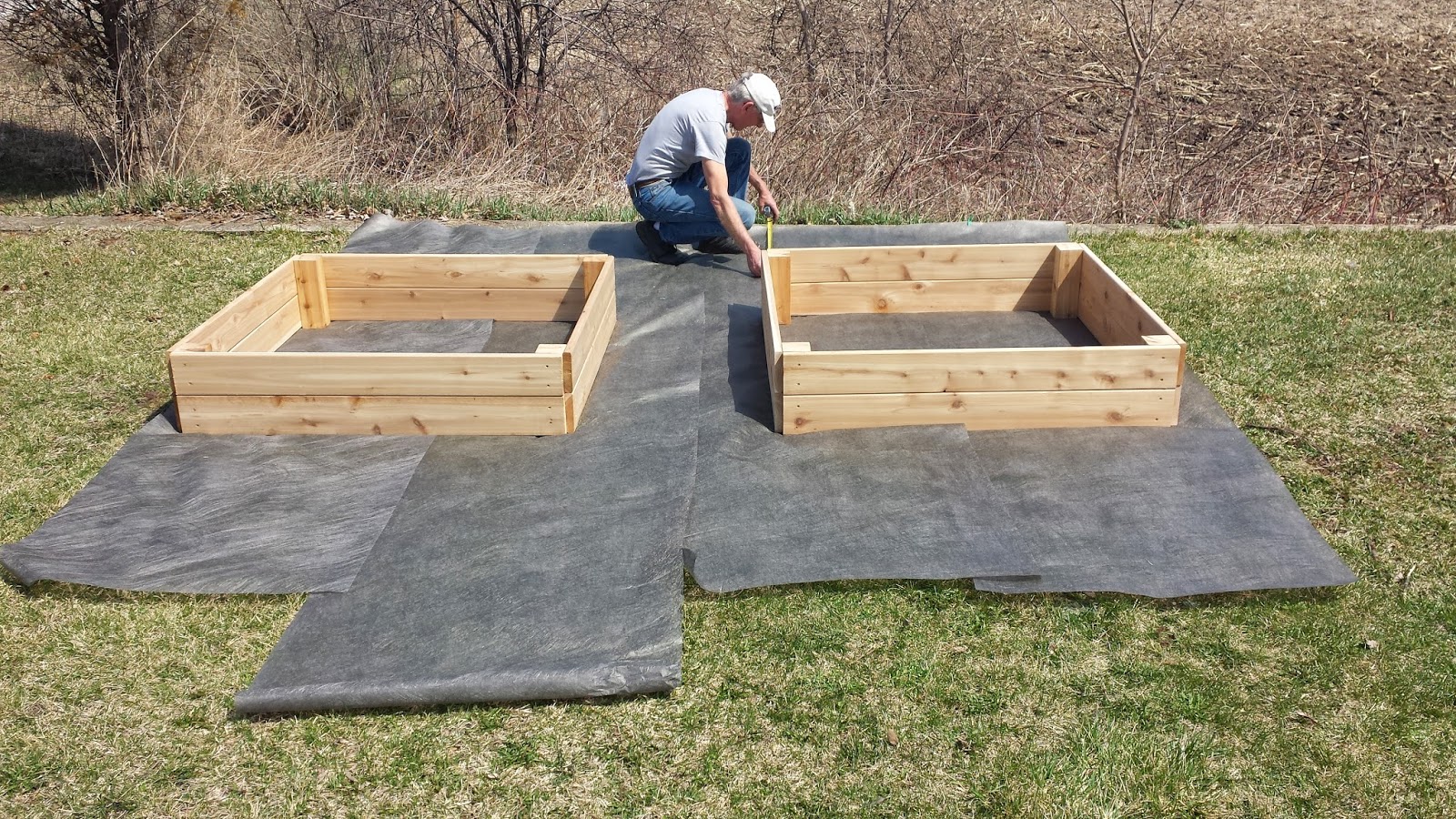 The hardest part of this whole project was mixing the soil.  By this time we were getting a little tired, but I really wanted to get the soil in.  The formula is 1/3 vermiculite, 1/3 compost, 1/3 peat moss.  So we mixed about 3 square feet at a time.  It was very heavy, even though the components are fairly lightweight, at least compared to regular garden dirt.  We mixed them together on a tarp, by rolling them around together like a cement mixer, and then hauled them into the garden.  It took about four mixed loads per bed, and that's when I discovered I was one bag short of the vermiculite.  So we'll have to go back and finish that one off this weekend. 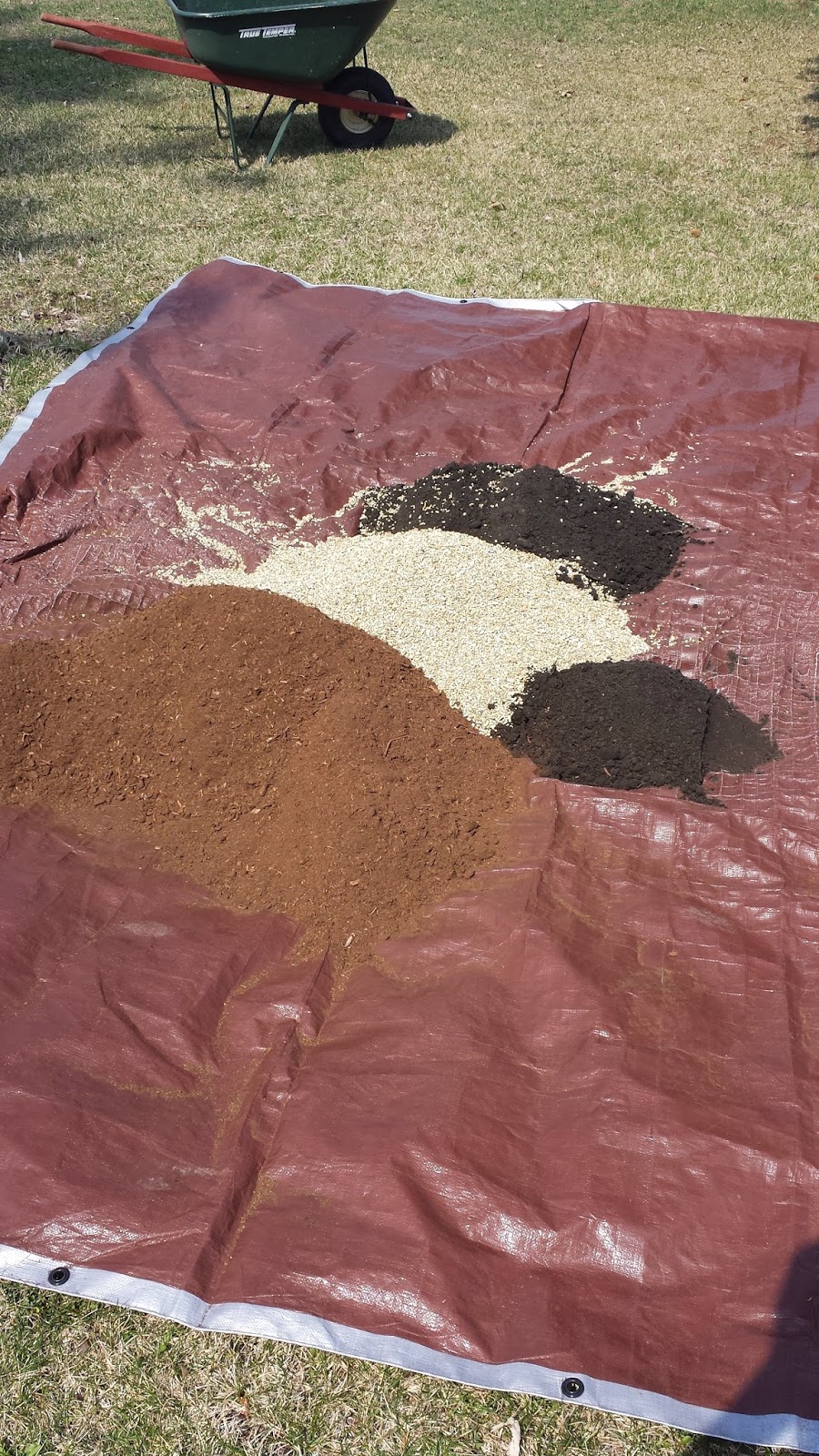 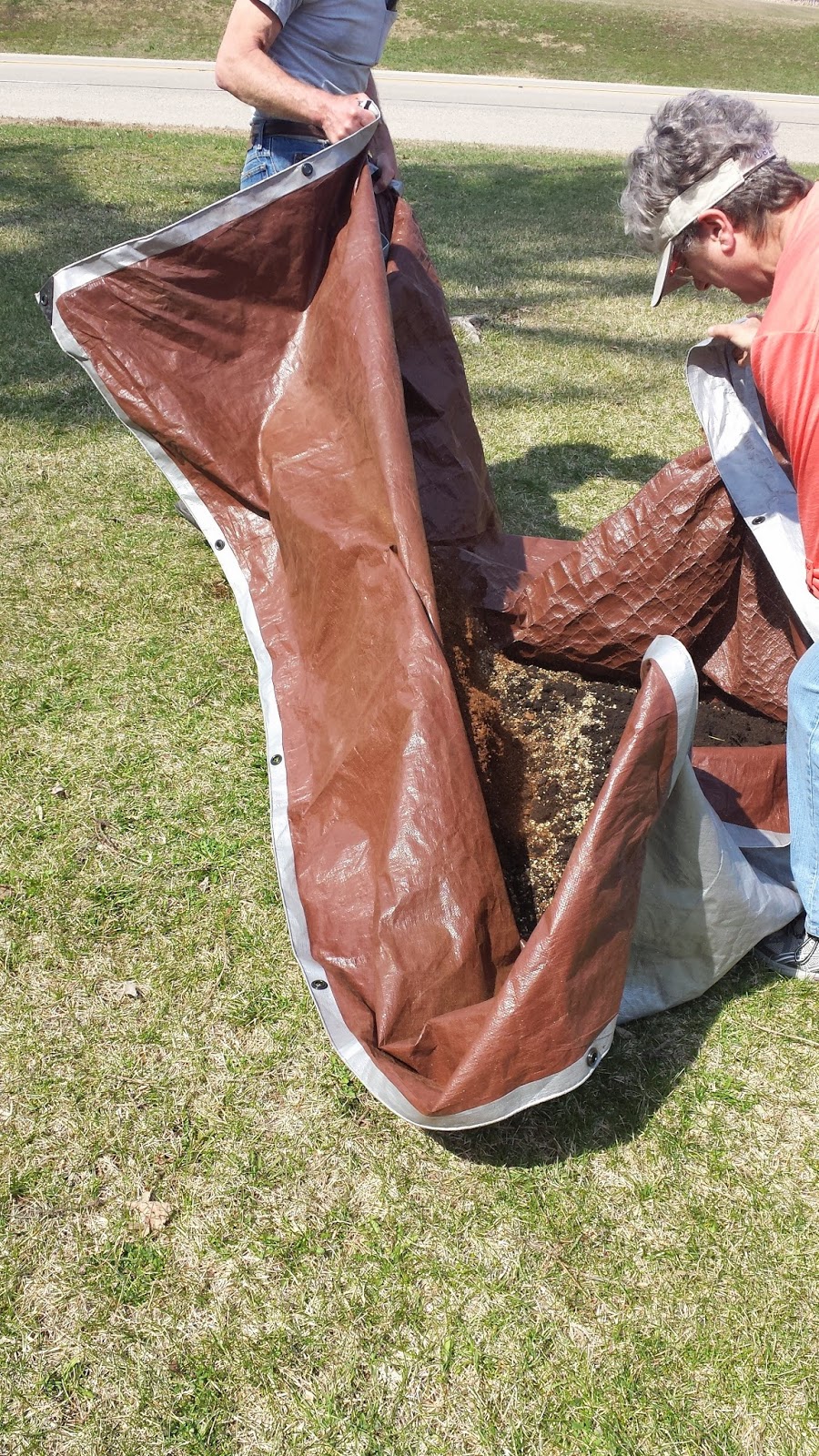 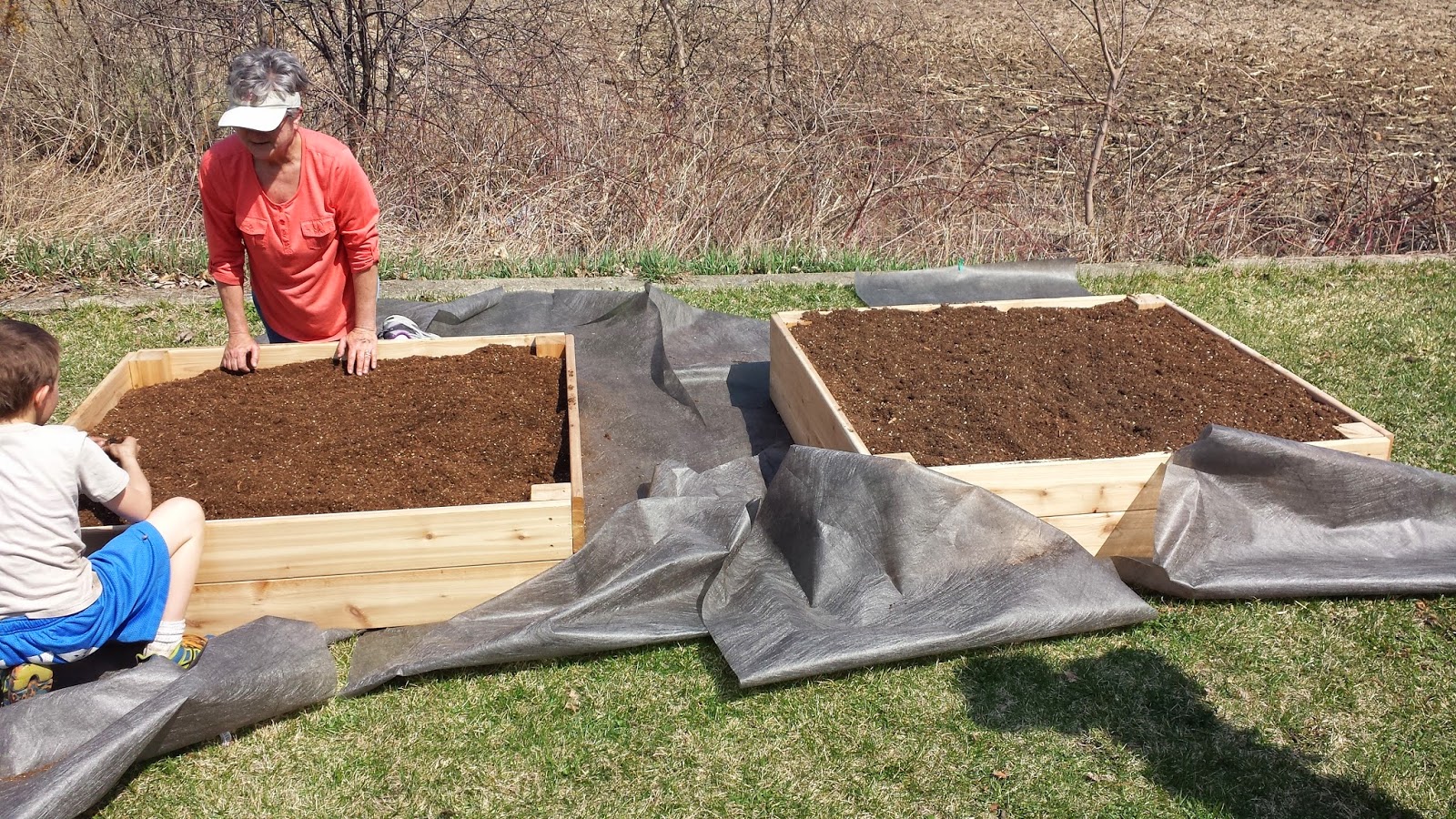 After we got the soil in, we put a vertical fence on the North end of the North bed and planted peas.  That's all we can really plant right now.  Our average date of last frost is May 20.  We'll plant everything else late May. 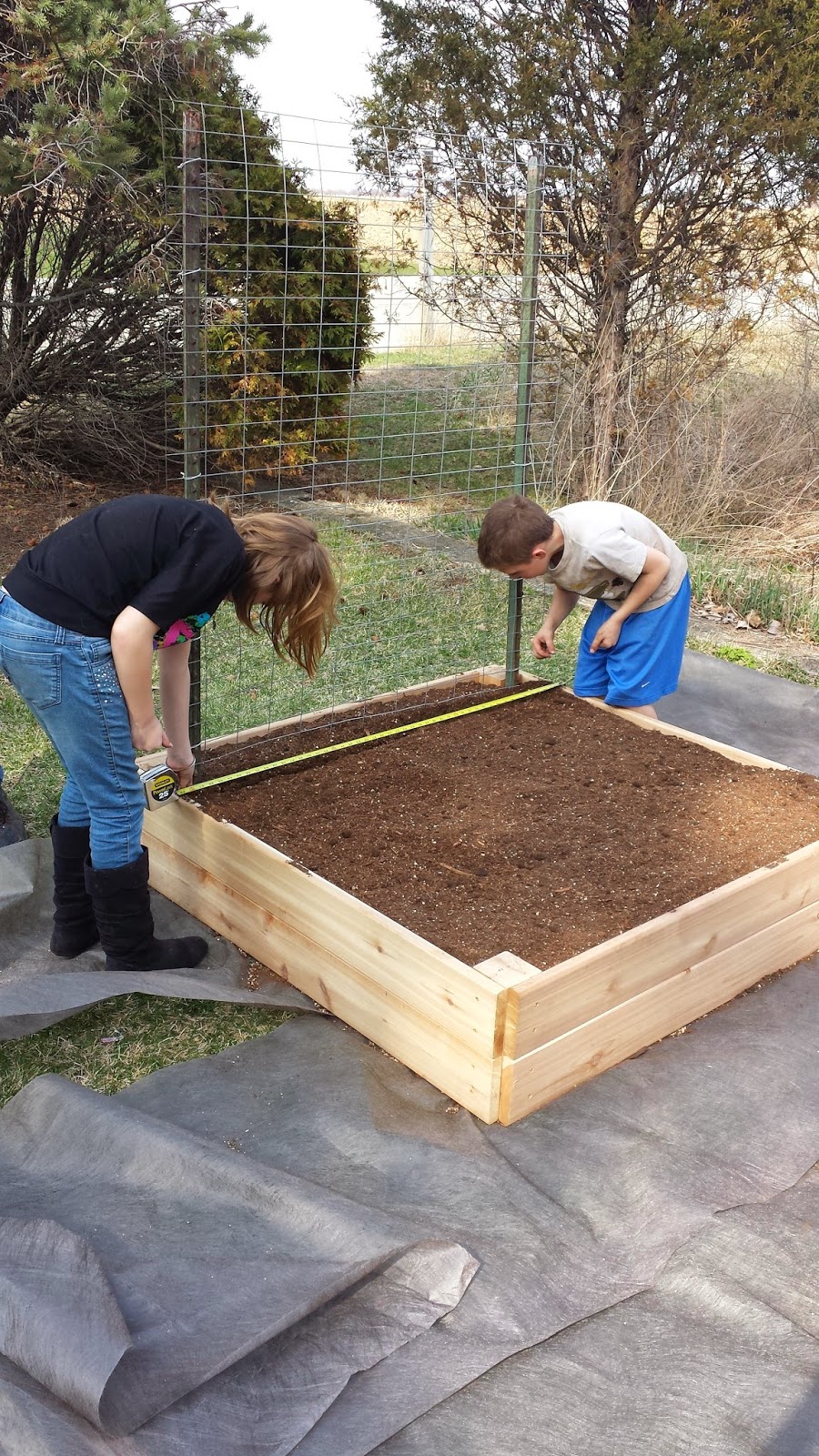 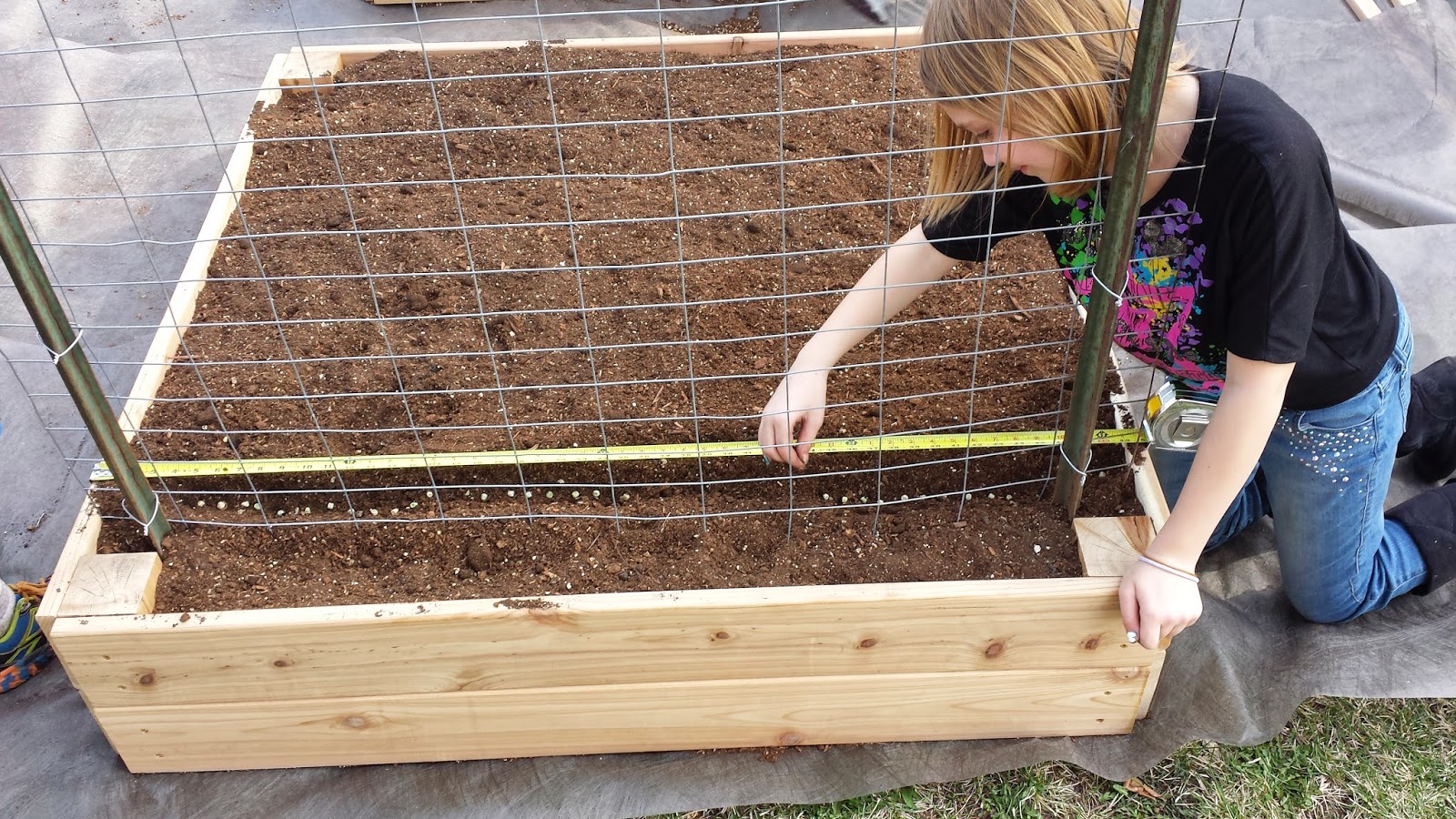 I'm planning on planting these like the Square Foot Garden, each square foot gets something, and a certain number of plants per square foot.  I'm still planning it out, but its mostly done, so I'm pretty excited to get some plants in there.

Today Mackenzie had to leave school early because she was sick, so I took advantage of the extra time and put the rest of the weed barrier down and stapled it. 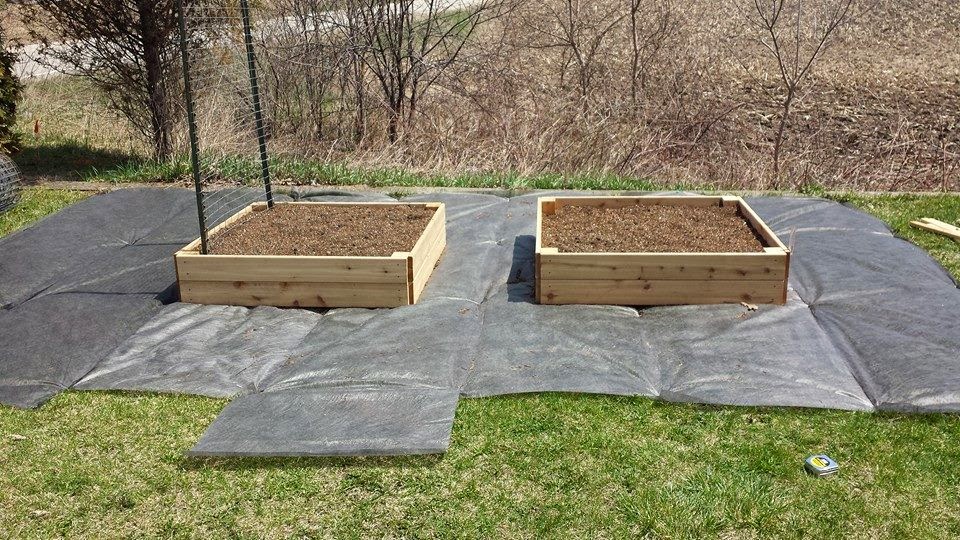 The next step, of course, is to get the fence around the outside and put wood chips down over the weed barrier.  I'm hoping to get some from the LaGrange compost site.  Hopefully they have some.  They have in the past, and then I don't have to buy any.