For those who may read this who don't know much about Ultrarunning or trail running, or even running in general.  This is an article that I wrote to try to explain some things.  Not a lot of data in here.  For a more technical in-depth report, see Part 2, which is yet to come.

If you don’t like the weather in Wisconsin, wait five minutes-it’ll change.  This statement was never truer than on Saturday, May 11 in LaGrange, WI.  The start of the Ice Age Trail 50 Mile race at 6:00 am was cool and overcast, 39 degrees and breezy.  The grass was wet with dew.  I stood near the back of the pack at the starting line in my shorts, a light jacket, and gloves.  I was so nervous I didn’t even notice the cold.  I had been working and training for this race for six months.  Supposedly the temperature would get up to 57 degrees and the wind would rise to 20-30 mph.  It never did get up to 57.  The temperature hovered around 49 degrees for most of the race, dropping to 45 during a period of sleet.  It rained, the sun shone, the wind gusted, the clouds came and went.  And it sleeted.  We had it all. 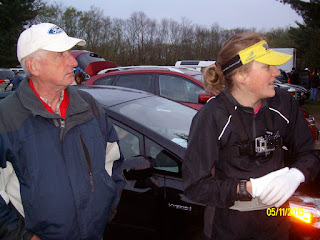 Before the start.  My dad and I. 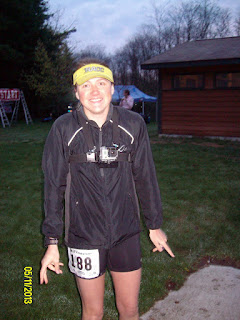 Another picture before the start.

I’ve run five marathons in the past few years, a couple half marathons, and oodles of 10K’s and 5K’s.  I’ve never gone into a race not knowing if I could finish.  This was my first Ultramarathon, though, (that’s any distance longer than a marathon) and it was the first time I didn’t know if I could finish under the time limit.  I was fairly certain I could cover the distance, but not whether I could do it under 12 hours.  The race was held in the Southern Kettle Moraine Unit, and the terrain is what was left behind after the glaciers came through.   The Ice Age Trail is technical.  It’s hilly, with steep, sharp elevation changes, and it’s rocky and rooty.  My preparation for this race was not what I was hoping for.  Due to our cold, wet spring, I was only able to get out on the trails to train four times before race day.  If I’d had a little more trail experience I think I would have gone into the race much more confident.


I had a great crew for my race.  Most Ultras allow the runners to have a crew.  Think of them as a pit crew in a NASCAR race.  They change your tires and fill you with fuel and send you on your way with motivational words.  My crew consisted of my boyfriend, my uncle, and my dad.  They’ve never crewed before and had no idea what to do, so we got off to a little rocky start, but after a while we got into the swing of things.  I had my own stuff that the aid stations did not provide.  My crew  would meet me at the aid stations and help me fill my water bottles, take things I didn’t want to carry any more,  took pictures, and filled out the spreadsheet I made (yes, I was that demanding about gathering and documenting as much data as I could for later analysis). 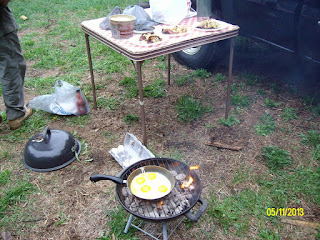 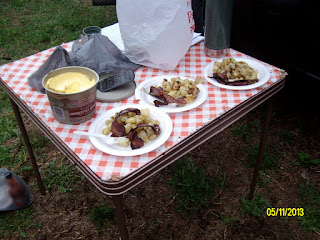 My crew really got into this race.  They even tailgated!  They made breakfast while waiting for me to complete the first 9-mile loop.﻿ 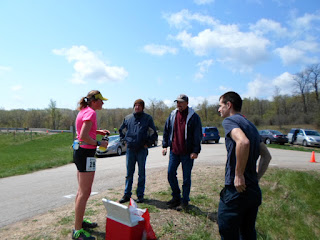 Part of my crew: from left- my dad, my uncle Mark, and my friend Dave who cheered me on at a couple of aid stations.  Not shown is my boyfriend, Mike, the picture taker. 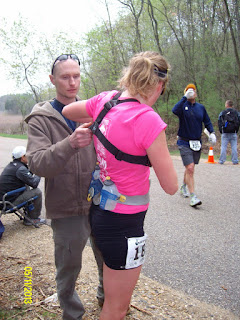 Mike helping me put the camera back on after I'd had it off for rain.


The race was hard.  Actually, that’s probably an understatement.   It was so challenging that at times I didn’t want to start running again.  The idea of quitting never once entered my mind, but I had to really convince myself to start running again after my walk breaks.  And it got harder and harder to leave the aid stations.  Most people think of a running race and think of a water stop- a table full of paper cups of water and sports drink.  In an Ultra, aid stations provide “real” food because when you’re running that far, you need to fuel your body.  Most aid stations had PB&J sandwiches, bananas, oranges, M&M’s, gummy bears, pretzels, potato chips, and boiled potatoes.  My rule of thumb is never try anything new in a race.  I had trained the last couple of trail runs with PB&J sandwiches, and found that they really worked for me.  So my plan was to eat PB&J and bananas at the aid stations.  I stuck to my plan, but towards the end of the race, I did not want to even look at another PB&J sandwich. 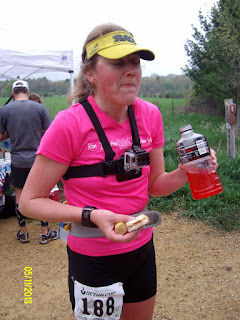 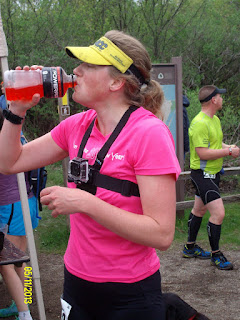 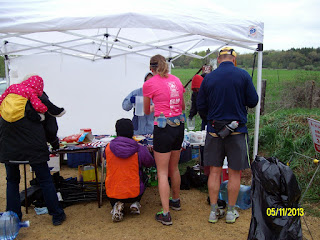 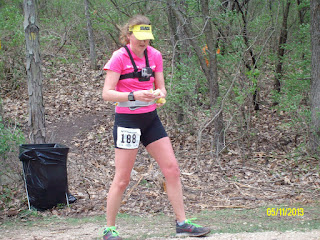 Various aid stations throughout the race. I ate a lot of PB&J, bananas, and drank my own Powerade because I don't like Heed, which is the energy drink the race provided. 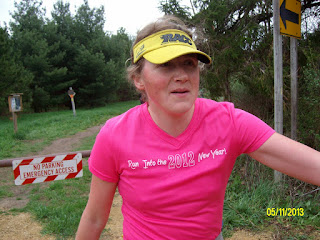 After a while, every time I stopped at an aid station, I had to stop and stretch my legs.  I think it helped with the tightness.  I should have started doing it from the beginning. 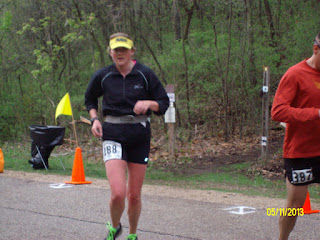 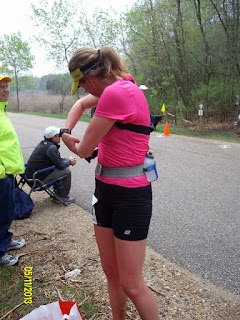 Coming in to Duffin Rd Aid Station the first time, 13.1 miles.  I took off my jacket here and put my camera back on.  The drizzle appeared to have stopped. 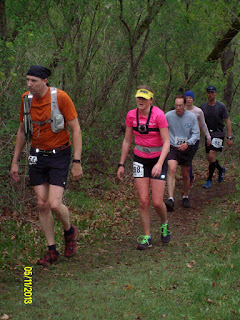 Walking in to Rice Lake Aid Station, 21.7 miles.  It got very bottlenecked getting in and out of this aid station.  This was the southern turn-around point on the course. 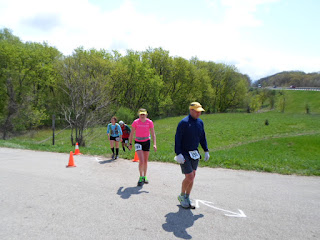 Coming in to the Hwy 12 Aid Station the second time through, 26 miles. 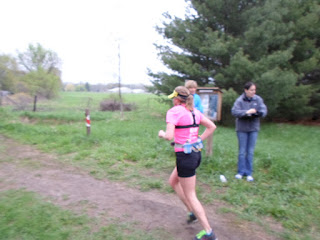 
By the time I hit the 40.5-mile aid station, it was about 9 hours into the race.  I had three hours to go less than 10 miles.  I knew I was going to finish.  As soon as I realized that, I started to get emotional.  That was the longest 10 miles I have ever run.  It seemed to take forever.  Part of the difficulty was that I had to go about 7 miles before I would see my crew again.  I think there is a point in every Ultra where the race becomes more mental than physical.  I’ve discovered that your body will keep going, even beyond what you think you can handle, but sometimes you have to convince your mind that your body can keep going.  I often found that I could keep running, once I was running.  The hardest part was to start running again after a stop or walk break. 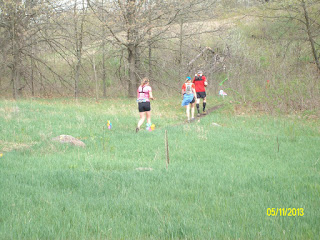 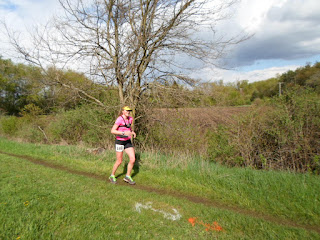 Bluff Road, second time through, 48.5 miles.  I didn't stop.  I just wanted to finish, and I'd just stopped at the Young Rd Aid Station 0.9 miles ago.
With a mile and a half left I decided that if I really pushed it I could break 11 hours.  I had 17 minutes.  I wasn’t entirely convinced that I could do it.  I knew that it was doable, but I would really have to run at the limits of my endurance.  No more walking except for the two hills in the last half mile (previously, I was using a 5:1 run/walk strategy).  So I took off and gave it everything I had.  I think my last mile was the fastest mile of my race, and when I came around the last corner and heard people cheering and saw my mom and my kids who came to see the finish, the waterworks started.  I came across the finish line smiling and crying at the same time, with my kids running beside me.  It was the best moment of my running career.  Better than my first marathon.  Better than my fastest marathon.  I came in at 10:57:24. 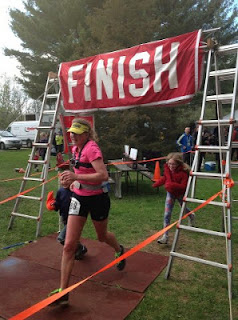 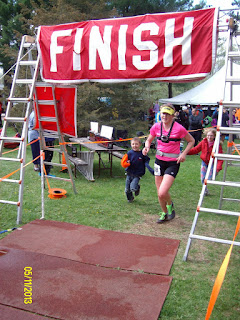 At the finish, with my kids Gavin and Mackenzie. 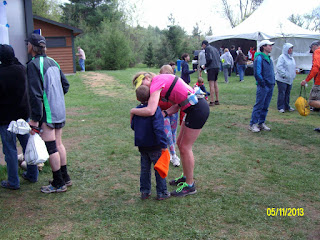 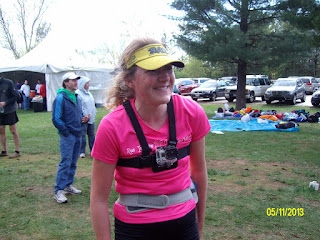 I haven’t committed myself to another Ultra, yet.  But I know that after this, I can’t go back to running only shorter races.  There’s something special about achieving a goal so far above and beyond anything you’ve ever done before.  After this race, I will lose three toenails, I think.  But I will do it again, oh yes.  And in a few years, I will be writing about my first 100-miler… 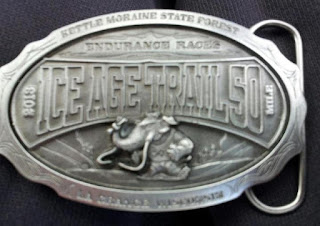