Today could not have been more perfect for a run.  It was beautiful.  It was maybe 48-50 degrees at the start and sunny.  Very calm, maybe a slight breeze.  It was 60 when I finished.  At times, I was almost too warm, but after the cold wet spring we've had, I can hardly complain.  A hundred or so of us converged again on the Nordic Trailhead for the second and final training run before the race in two weeks.  This time we went North, turning around at Emma Carlin.  It was supposed to be 19 miles.  My watch said 18.75, which is weird because I turned around at exactly 9.50 miles, so not sure where I lost a quarter of a mile...  GPS watches can be like that, though.  Especially in the woods.

So my goal going into this was to hit 12:30-13:00 pace because my 12:00 average pace from last week was too fast to go 50 miles.  I thought I'd practice hitting a slower pace and see how it felt.  I couldn't get down to it.  I know I went out too hard.  I was much too fast.  And I knew I was too fast, but couldn't slow down.  I know my effort was to hard.  I could tell I was exerting myself more than I should have been, especially if I expect to maintain said effort over the course of 50 miles. 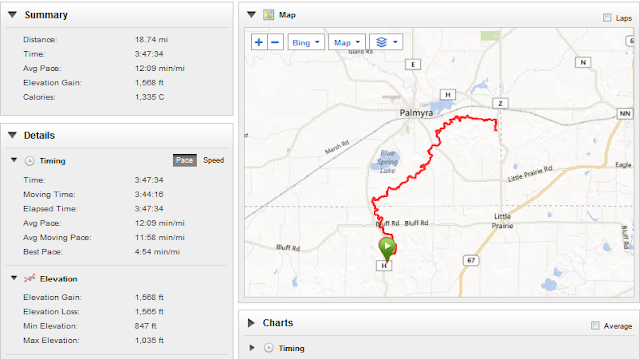 So my average was probably a minute faster than what I would have liked it to be.  I was definitely feeling it the second half of the run.  My legs felt battered from the ups and downs.  The rocks and roots and jarring of the downhills really got to me today.  Not sure why I didn't notice it so much last weekend.  Could be that the northern section is a little more technical than the southern section.  I don't know.

So I did my 1 minute walking per 5 minutes of running after I got onto the Ice Age trail, maybe 25 minutes in.  There were times when I stopped to walk when I didn't feel like I needed to.  It was nice and easy and I just wanted to keep running, but I have to tell myself that that little walk break early and often is going to be important in the later stages of the race.  It seemed like a lot of people just had a "run when it's runable" theory.  I wonder how that works?  Do they do more walking towards the end?  If they walked more often earlier, would they be able to run more towards the end?  I know that's the theory.  I'm not willing to test it though.  Too close to race day to do any experimentation.  I saw a lot more people today than I did last week.  I think maybe my pace was influenced by other people, trying to keep moving so people behind me didn't get frustrated, and everyone seemed to be going faster than me and not walking unless it was a hill.  I have to focus on my own race and do what I know to do and not be influenced by others or worry about what they'll think when I'm walking on a perfectly good runable flat.

I did experiment with my fueling today though.  I made a PB&J sandwhich and cut it into four squares and put two squares in two baggies.  I like real food while I'm running.  Gu is hard to stomach, it makes me sick if I have too much of it.  I've done Pop-Tarts for a while, but last weekend when I tried to eat and I was breathing so hard, the Pop-Tart was too dry and I felt like I was inhaling dry crumbs and it was hard to eat and breath at the same time.  So I know they have PB&J at aid stations, I was thinking what a good fuel, and it will be softer and moister and probably go down easier.  And I was right.  I also bought NutriGrain bars to try, but didn't get to any of them today, so I don't know if I'll use them in the race.  The sandwiches worked well, and I think I'll stick to that.  Maybe Gu or Chomps too, but I like the PB&J.

I fueled at 45 minutes, 1:30, 2:15 and 3:15.  I felt like at 3:00 hours it was just too soon.  I didn't want to eat at all today.  I didn't get hungry, which is probably a good thing, and just didn't want to when it was time too.  That might be something I struggle with in the race, eating because I know I need to even when I don't want to.  I didn't get sick today though.  A very mild discomfort, not really a headache, but I could tell my exertion was too high.  Not too puffy of fingers today either.  I did drink more, I think.  Every time I stopped to walk.

So my conundrum now is what to carry on the race.  I haven't been carrying my handheld water bottle much, and last Thursday on my 7-mile run when I did carry it, it was a little awkward and uncomfortable.  Heavy, I'm not used to carrying it.  If that's all I carry, I won't really have a place for Gu's or any other nutrition.  This should really only be an issue on the first loop of the Nordic Trail.  Nine miles before an aid station with nutrition.  The first aid station is just hydration.  So to go nine miles I really should have some fuel with me.  There's a little pocket on my water bottle that could hold a Gu or two.  And if it's chilly at the start, I might be wearing a light jacket or vest that has pockets.  I can get rid of it on my way back through the Start/Finish.  I don't think I want to wear the fuel belt with the two 20-once bottles.  It's heavy.  I don't think I need to be carrying all that weight.  I could wear the little one, with the two 10-once bottles and carry the handheld.  Of course, maybe I wouldn't need the handheld then.  It would be more comfortable for me to run without it.  I wouldn't go more than 5 miles between aid stations.  That's over an hour.  Could two little bottles get me through that?  Probably.  I think that's what I'll do.  It'll seem light after the big fuel belt.  I've got some time to think about it.

I did kick a rock or root or something today with my right foot.  It hurt for a while.  But so far haven't lost any toenails or done any permanent damage, so everything is in working order.

I did notice how hard it is to pass on the trails.  When someone's coming the other way one of you has to get into the brush so both people can pass.  That kind of sucks.

So in general, I don't feel so confident after today's run as I did last weekend.  Last weekend was 6 miles longer, too.  I felt more beat up today, and my average pace was slower.  Weird.  I have two weeks of some serious tapering now.  Next weekend is 10 miles, and there's quite a bit of rest coming up.  Like tomorrow I don't run, then 5 miles, then the next day I don't run.  Hopefully this taper will do what it's supposed to and on race day I'll still be running and be making that final turn and seeing the building and crossing the finish line.  Under the time limit.