It has been brought to my attention that my blogs are negative for the most part, and they aren't "happy."  So, after a successful training run today on the trails, I am posting a happy blog.  :)

First of all, I'm happy because my watch didn't shut off on me.  I stopped it and started it twice, thinking that maybe it just went to sleep or something to save the battery due to inactivity?  I don't know, I'm reaching.  But I know last night when I went to plug the watch in it was dead, but when I plugged it in it said 33%, so something is still not right and I was worried that it would shut off on me again today during my run.  I need to get another watch that I can just start a timer I think, so I can maintain my run/walk ratio.  I know for a fact that my watch will die long before I get to 50 miles, probably before I even get to 30 miles in the race.  So, that's on my to do list. 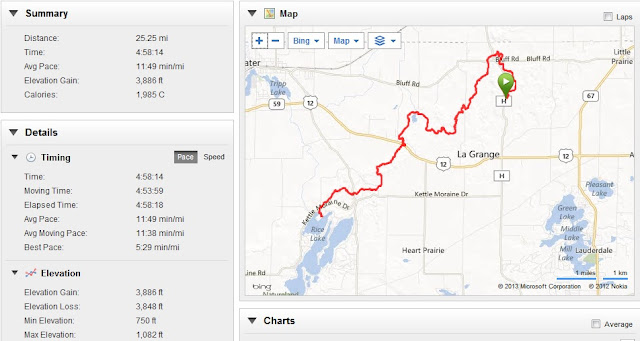 I changed my run/walk strategy for this run.  Actually, the last time I was on the trails I really didn't have much of a strategy because I did so much walking.  This time, I walked for a minute every five minutes.  And I managed to keep that up for the most part the entire run.  (Thanks Aunt Donna)  I ran a few more of the inclines, too.  The longer, steeper ones I walked, but if it was a gradual incline or a short steeper section, I ran up it.  I think it easier for me to run on those uphills and then keep going when I get to the top than it is for me to walk up it and start running again when I get to the top.  That might not be smart in the race, though.  I could potentially waste some much-needed energy by doing that, but it worked pretty well for me today. 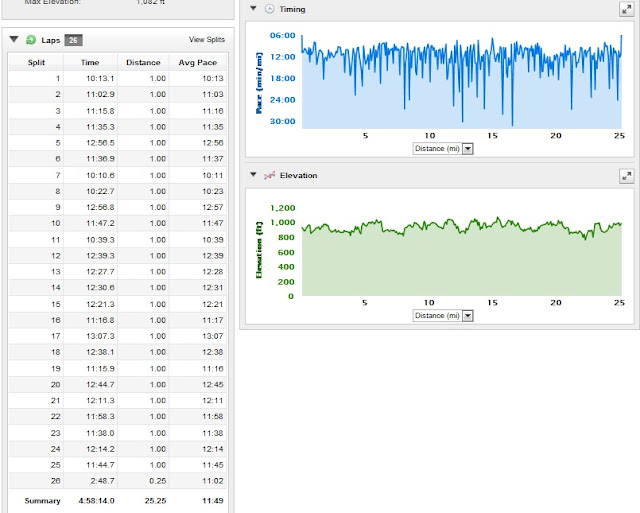 I also made sure I fueled every 45 minutes (again, thanks Aunt Donna).  I am wondering if some of my fatigue two weeks ago was because I didn't fuel often enough and I experienced the bonk.  My concern with fueling every 45 minutes is that it is a lot of sugar, even just drinking water, no Heed.  I was nauseous when I got done.  Still am, 3 hours later.  In the race there will be more "real food" options, and there will be some salty starchy things.  I think that will help.  Rails to Trails marathon, I over-gu'd and ended up throwing up at the end from all the sugar sitting in my stomach.  It's something I have to watch out for.

My trail shoes worked well today.  I was happy to have them.  The first half of the run the trails were in really good condition.  The snow and ice are gone and I didn't even hit any mud.  After the torential rains we've been having, I thought there would be mud and standing water in places, but they trail was great.  On the way back it started to get muddy in spots.  I think because the sun was out and the ground was thawing.  The temp to start this run was 28 degrees.  It was 37 when I finished.  The sun was out and it was actually very comfortable.  Too warm at times, in my underarmor and tights, but I'm glad I had them.

Below is a video of running to Spirit Lake, the turn-around point.  As you'll see, there was some confusion as to where to go once I got there, but I figured it out.  The lake is pretty close to the trail in places due to all the rain, but you can also see how good trail conditions really were today.

So my average pace was 11:49.  I finished the 25.25 miles in 4:58.  I'm thrilled with it, but the question is can I maintain that pace for double the distance?  The answer, unfortunately, is no.  And I know so.  The last mile was kind of hard.  It is possible that that was all psychological, though, knowing that it was the last mile and all.  But I was getting sore and I was walking more inclines, so I'm pretty sure I'm going to need to dial it back a notch during the race.  Next weekend I'm going to try to see if I can maintain 12:30.  The hard thing about pace on trails is that miles differ from one to the next and if one mile is mostly uphill naturally it will be slower than the mile that is mostly downhill.  But I can go slower.  I need to try to go slower.  But not too slow or I'll be back where I was two weeks ago.  On race day, logic tells me (from previous experience) that I will be able to run faster than in training.  Of course, 50 miles is a long way, so logic is also telling me that it's going to be 20 miles farther than I've ever run and I can run faster for the whole 50 miles.  I think I need to try to aim for 12:30 pace.  Even 13:00 pace would be okay.  Much slower than that and I will start to panic, though, because then I'll be flirting with cut-off times.

I have to watch my toenails this week.  At one point I tripped over a rock and kicked it hard with my right toe and about 10 seconds later I hit another one with my left toe.  They hurt for several miles after that.  Hope I don't lose them.  This is a bad time to have a toenail die.  Race is in three weeks.  In general, today was a great confidence booster.  I ran really well, and it makes me believe that I can do this race after all.  The hay is in the barn, now.  Time to taper.
Posted by Sara LaFlash at 2:12 PM