It was cold and kind of windy today, the sun periodically popping out to warm me, but mostly a normal winter run.  It was 30 degrees, with a windchill of about 20.  The roads were nice and dry and I wasn't wet, so I can't complain too much even though we are about 10 degrees below average for this time of year. 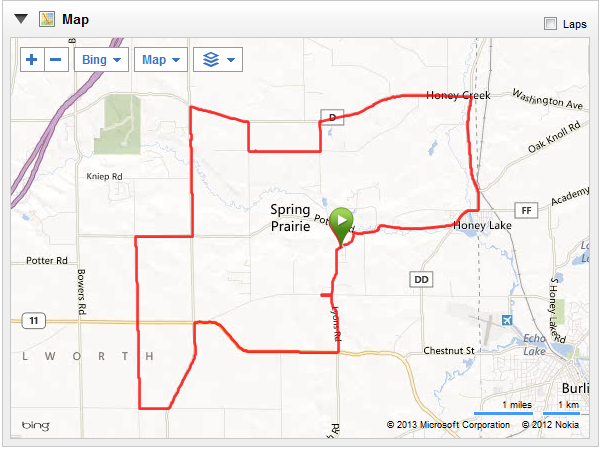 I set out today with one main goal, and that was to experiment with a run/walk strategy.  After discussions on a forum, I decided to walk for three minutes after every three miles.  Not having run/walked in any of my marathons, I know that this is going to take some practice to teach myself to get used to beginning to run again after a short walk.  The first few times wasn't too bad, and it was nice to be able to fuel and hydrate while walking instead of running.  And it gave me a good opportunity to rotate my right shoulder without almost losing my balance, which I try to do every three miles on my run.  And I have to say, my shoulder feels pretty good tonight.

After the 18th mile as I started up again after my walk, I noticed what felt like a blister, or a hot spot under a callus on my right big toe.  I know there's a callus there, and it felt like there was a blister forming under it or a lump in my sock or a rock stuck on the bottom of my shoe, or something.  After running for a few yards, the pain of it went away, but it was still something that at this point in my race, would worry me, as I wouldn't even be halfway done with the race yet and I can be pretty sure it would just get worse.  After walking the final time, the pain was worse, and so this is something I have to keep an eye on.  It's possible that I may need to change shoes or socks halfway through the race.  That may create different pressure points on my feet.  When I took my sock off and looked at it tonight when I got home, I couldn't see anything, so if there is a blister it's under the callus.  So I need to pumice away those calluses as quickly as possible now during my showers.  I know blisters tend to form under calluses and it is good to keep them worn down.  Previously I haven't had to worry about it, but with my runs getting longer and longer, now I'm going to have to be proactive about it.

My last walk break was actually 21-1/2 miles into the run, not 21.  I hit the 21 mile mark just before the beginning of a long shallow descent, so I waited another half mile until the descent became an ascent and took my walk break then. 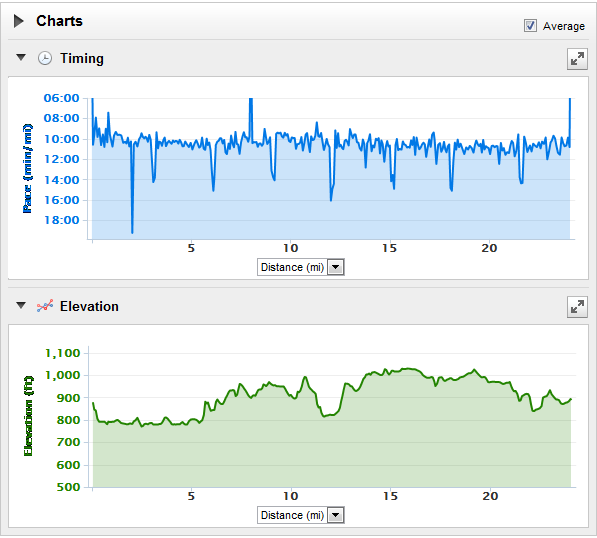 I have to say, I think I held up pretty well considering this is my longest training run to date (for any event I've done).  In the last mile, I may have tried to push a little bit more than I should have.  I now have some pain in my right glute.  I haven't had pain here before.  I was expecting pain in my groin and hip/flexor area, because that's where it normally hurts the most after a long run.  There was some, and part of me was hoping there wouldn't be any using this run/walk strategy.  But its not too bad, and actually my glute pain is the worst pain right now, two hours later.  Hopefully I didn't pull something and it'll go away.  I might need a good massage tonight to work out the soreness.  ;)

My fueling plan was to consume a more calories, especially on a run this long.  I was going to fuel every six miles.  Good opportunity while walking.  At my six-mile walk break I took a Hammer Gel.  At my 12-mile walk break I took half a Clif bar.  I couldn't eat the whole thing in three minutes and while I could have finished it while running, I chose not to.  Well my stomach was rumbling a mile or two later and I decided to finish my Clif bar at my next walk break, after mile 15.  So I did, I couldn't finish it in three minutes, so I finished it while running.  My stomach was still feeling empty and rumbling a little bit so I decided to continue on my planned fueling strategy and consume more calories three miles later at mile 18.  I had a Lava gel.  The gels go down quicker than chewing a bar.  I may have to consider buying some more.  I don't feel like I hit a wall or anything, so my fueling worked.  I did feel a little cramping in my belly towards the end of the run, but that could have been a hydration issue.  I drank every three miles, and sometimes in between.  When it's cold I don't feel thirsty, but I should plan on drinking more as it warms up.  I also had puffy fingers, which again could be contributed to hydration, and also some head pressure when I sniffed.  All can be attributed to hydration.  I may need to drink more.  I know I'll need to drink more during the race, and as it warms up and I sweat more.

All in all, this was a successful experiment for run/walking.  I am going to continue to run/walk the remainder of my long runs, as I believe it will lead to quicker recovery.  One thing I noticed was that my walking only added about a minute to my average mile pace.  Not bad at all.  And once I get on the trails, and my running pace is slower, I think it will add even less to my average.  That's a good sign.  For the recovery benefits it will give me, I'll take a minute slower.

Okay, well, I'm showered and re-fuelled and now it's time get the kids in bed and get my glute massaged and get to bed myself.  I have five miles tomorrow.  (By the way, I ran a hilly 5K race yesterday, so if it did affect this run I couldn't tell.  If I hadn't run that race today may have gone even better.)
Posted by Sara LaFlash at 5:25 PM